Yells of “mine, mine, mine!” resounded through the Columbia College grounds as students bumped, set and spiked during the President’s Inaugural Sand Volleyball Tournament championship. 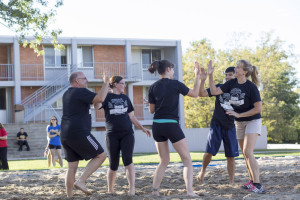 Members of the Beach Bum team didn’t get a chance to play the president, and maybe that was actually for the best, they said. “We were kind of scared that we would hit too hard,” Berger joked. The team might have had a bit of an advantage — Berger is a member of the Cougar volleyball team.

The five players have been playing together for fun since the sand volleyball court was built. They all agreed that they love attending a place like Columbia College where they can not only play in a sand volleyball tournament, but also that the president played, too.

“It was great that they added this, at least in my last year in college,” Berger said. Bruhn added, “Thank you for putting the sand pit in.”

Dalrymple presented the team with a large volleyball trophy after the tournament and also recognized them during the Cougar volleyball match later that night against Benedictine University-Springfield, whom they defeated.