The question: What do President Richard Nixon, the movie “The Sting”, baseball legend Hank Aaron and Columbia College all have in common? 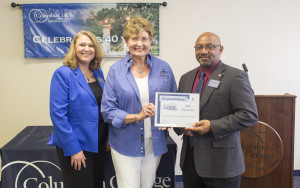 The answer: All four of these entities were on the verge of doing something historic in the year 1974. Nixon was about to become the first president to resign after being embroiled in the Watergate scandal, “The Sting” won the Oscar for best picture, Hammerin’ Hank hit his 715th career home run to break Babe Ruth’s Major League Baseball career home run record and Columbia College started the expansion of its adult education program into Jefferson City, Missouri.

“I want to profess that it is our desire to continue the important work that we do here,” Musgrove said to the attendees gathered at the Jefferson City campus. “We plan to provide educational opportunities to the people of the Jefferson City community for another highly successful 40 years, and more. It is indeed my pleasure to participate in today’s ceremony and to celebrate with you 40 years of service to your community.”

Initially a venue for members of the United States National Guard to work toward their degree, Columbia College-Jefferson City started serving the civilian population in 1982. The campus has resided at its current location on Emerald Lane since 2000, and today continues to serve civilian and military adult learners in the Jefferson City area. In 2013, Columbia College-Jefferson City served almost 1,700 area students who took 7,381 classes; 1,100 of these students took at least one online course. There are more than 2,300 Jefferson City campus alumni, with 79 percent of them presently living within 30 miles of the campus.

“Earning my degree was one of the most pleasurable experiences and a true highlight of my adult life,” Enloe noted. “I am so blessed to be associated with (Columbia College). Going for greater is what this school has promoted in my life and my work. Thank you all for making a difference in my life and in the lives in thousands of students who have passed through these doors and the many more that will follow in the future. When they apply these principles and the knowledge they have embraced from this institution, their lives will be changed and greater things will be on their horizons!”

Following the program and remarks, several members of the Jefferson City Chamber of Commerce joined Bocklage and Musgrove for a “Pride and Progress Ribbon Cutting” event, and refreshments were served.