Crystal Williams, an alumna of the college, is an incumbent running against two challengers in the election for the 2nd District at-large seat on Missouri’s Jackson County Legislature. According to an article in the Kansas City Star, she’s not too worried about losing her re-election bid. 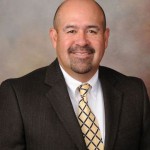 Ray Madrigal, who received his bachelor’s degree in criminal justice administration, is running for the Lemoore, California, City Council. He spent 30 years of service in the California Highway Patrol and believes his leadership and experience mark him as the best candidate.

Read more about them in the following articles: