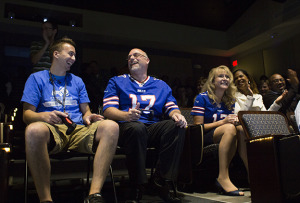 James “Eric” Dailey, a nursing student at Columbia College, prevailed in the President’s Inauguration Video Game Challenge, which featured Madden NFL 15. After battling his way through a grueling 48-person bracket, Dailey faced off against President Scott Dalrymple, ultimately defeating the president by a score of 32-13. To recognize his opponent’s video gaming prowess, Dalrymple will pay for Dailey‘s textbooks for an academic year. Dailey also will receive a year’s worth of free pizza, courtesy of MaMa Rosa’s Pizza.

“(Dalrymple) has been trash talking for two or three months now, so it felt good to finally beat him,” Dailey said. “I’m going to study every day, play Madden and eat pizza every day.”

Kevin Graham, a business student at Columbia College, was the runner-up in the student competition, and will receive a six-month supply of free MaMa Rosa’s pizza.

Although he wasn’t victorious, Dalrymple enjoyed the event and isn’t cross about footing the bill for a year’s worth of nursing textbooks.

“Since (the money) is going towards textbooks, it’s hard to feel bad about it,” Dalrymple said.

For a fun recap of the event, check out this video: