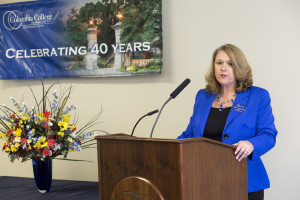 Columbia College-Jefferson City is pleased to announce the launch of a new, in-seat master’s of business administration (MBA) degree program. The new program will be offered starting in the January session, which begins January 12, 2015.

“This is a very exciting opportunity for our campus and comes in response to the Jefferson City community and our students voicing a need for a local, in-seat MBA program,” Becky Bocklage, director of Columbia College-Jefferson City campus said. “We have outstanding faculty in the business administration area that can offer the insight and quality instruction as we launch this new offering at our campus.”

For additional information, visit www.ccis.edu/jeffcity or call (573) 634-3250 and ask for Academic Adviser Chris Riemer. The Jefferson City campus is located at 3314 Emerald Lane.

Established in 1974 at the National Guard Armory, Columbia College-Jefferson City started serving the civilian population in 1982. The campus has resided at its current location on Emerald Lane since 2000, and today continues to serve civilian and military adult learners in the Jefferson City area.