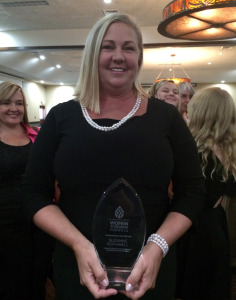 The Professional Excellence Award honors an outstanding businesswoman who has been in a business or field for five or more years and who has demonstrated a mastery of job performance and made significant contributions to a business, organization or profession.

“The greatest compliment I can get is to be called a mentor,” Rothwell said in her acceptance remarks. “Professional excellence is connecting others to their goals and aspirations.”

Rothwell has led the public relations department for two years, a time in which Columbia College seems to have gained a greater presence in the communities the college serves. She is an ambassador for the Chamber of Commerce, a member of the board of directors for the Greater Missouri Leadership Foundation and a member of the United Way campaign and Women’s Network.

Rothwell was selected for the award from a group of 10 finalists.

“All the nominees and winners are a credit to their occupations and to the community,” Vicki Russell, publisher of the newspaper and co-founder of the awards, said in the Columbia Daily Tribune. “They are among the highest achievers in our area and certainly deserving of recognition, not only for their professional accomplishments but also for the many things they do to serve others.”

Russell, who previously worked with Rothwell at the Chamber of Commerce, said that nominators wrote that Rothwell’s strongest leadership skills include mentoring others, paying attention to details, letting others take credit, and overall getting things done. She also mentioned her commitment to the Columbia community.

Even though she had no idea she was going to win, Rothwell’s husband, Jim; daughters, Kaitlyn and Olivia; and mother-in-law, Virginia, were there to support her on that important day — just in case.

“You don’t want to take moments like this for granted,” she said.