With paintings as a backdrop, a trio of local artists – a writer, poet and photographer – came together to share their work as part of the Hearing Voices/Seeing Visions event at Orr Street Studios in Columbia, Missouri.

Scott Dalrymple, Columbia College president, shared some of his original work including a story originally published in The Magazine of Fantasy & Science Fiction (“An Open Letter to Earth”) and a current work in progress (“How Gary Goho Got Away”). 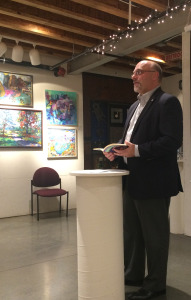 Dr. Scott Dalrymple, president of Columbia College, reads from “An Open Letter to Earth” at an event Nov. 19 at Orr Street Studios.

Though he read from two fantasy pieces at the event, Dalrymple (who has three English degrees) specializes in Mark Twain, Shakespeare and turn-of-the-century American novels. As dean of Excelsior College in Albany, New York, he encouraged faculty to develop courses that capitalize on topics accessible in a pop-culture environment – including courses on zombies and vampires.

Despite varied interests, in an interview by The Magazine of Fantasy & Science Fiction, Dalrymple explains that though he has written in other styles, fantasy is his go-to genre. “Besides, if I want realism I’ll go to a Waffle House.” he said in an interview.”What’s so great about reality? Besides the waffles, I mean.”

Others involved in the program at Orr Street Studios included Rich Smith, a poet originally from Belton, Missouri. Smith was a finalist for the Ruth Lilly Prize, which, according the Poetry Foundation, “honors a living U.S. poet whose lifetime accomplishments warrant extraordinary recognition.”

In addition to Dalrymple and Smith, Shane Epping was part of the event. Epping originally worked as a high school teacher and wrestling coach before changing careers at 32. He now works as a photographer and adjunct faculty member at the University of Missouri journalism school and enjoys storytelling through photography.

“It was a pleasure reading alongside Rich and Shane, whose work I admire,” Dalrymple said. “And the Orr Street space is one of the nicest I’ve seen.”