‘There is no statute of limitations on loyalty’ 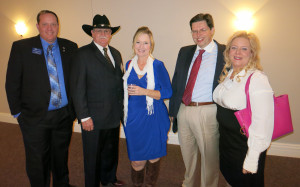 Jonathan Davis had a “huge and unusual skill” that the United States Army found itself in dire need of in 1974 – that skill was typing. In fact, Davis typed so well that the Army pulled him out of the field as a combat engineer and made him a company clerk on the base in Fort Leonard Wood, Missouri.

One day, as Davis sat typing in his office, his “mean, tough-as-nails first sergeant” came by his desk and said, “Davis, I’ve been looking at your record, and you got some good scores there, son. I want you to go over to that education center and sign up for college.”

After resisting for two days (and being put on kitchen patrol for 30 days for his resistance) and enduring 30 minutes of “motivational speaking,” Davis relented and started his journey toward a bachelor’s degree in business from Columbia College-Fort Leonard Wood, which he earned in 1978. He was the first in his family to graduate from college, which inspired both of his younger sisters to obtain their own degrees.

Davis went on to earn a master’s degree in accounting and management from Webster University and has been a member of the Columbia College-Fort Leonard Wood faculty since 1982. He has taught and advised countless students, especially those seeking career options in the areas of accounting and business in his 32-year teaching career.

Many stories like Davis’ have been written and told throughout the halls of Columbia College-Fort Leonard Wood. On Oct. 30, 2014, a group of alumni, students, faculty and staff joined together at the on-base campus to celebrate those stories, accomplishments and the outstanding partnership the college has had with the military since 1974.

“One of the things I learned growing up that I’ll never forget, and the military understands this very well, is that there is no statute of limitations on loyalty,” Columbia College President Dr. Scott Dalrymple said to the attendees during his remarks. “I am very proud to be working for a college that has such a tradition with the U.S. military over the last 40 years, and we very much hope it continues for the next 400 or so.” 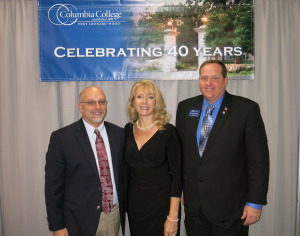 Indeed, the relationship between Columbia College and the U.S. military has spanned four decades starting with locations in St. Louis, Fort Leonard Wood and the Great Lakes Naval Station in Lake County, Illinois. That partnership has since expanded to 18 campuses on military bases throughout the country, which accounts for half of the college’s 36 Nationwide Campuses.

With increased access to education for students both in the military and the private sector, instructors like Davis have played a key role in these student’s lives for the duration of their existence.