A pledge to serve

Seventy-five miles away from each other, Shane Jackson and Devon Davis were searching for answers to the same question: “How can I serve my community?” 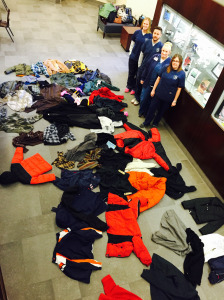 Through time, effort and conversations with their classmates, Jackson landed on holding a coat drive, while Davis chose volunteering at a health and wellness fair.  These two decisions served one purpose. Jackson, the class president of the Columbia nursing Class of December 2014, and Davis, the class president of the Lake of the Ozarks campus nursing Class of 2015, agree the projects are all about connecting the college to the communities it serves.

There’s a theme here, you see?

Built into Columbia College’s nursing program is a component that teaches a different kind of lesson: service. When students graduate, they recite the Florence Nightingale pledge, in which they commit to several promises, including taking responsibility for promoting the health and welfare of their community. Each graduating class must complete a project that benefits the people in the area in which they live.

“The goal is to be positive ambassadors to the community for Columbia College and the nursing program,” Davis says. “This also helps to foster that caring, helping attitude that is essential in the field of nursing.”

Over the past three years, students from the two campuses, which are the only two locations offering an in-seat Associate of Science in Nursing, have hosted several nursing service projects, including a “Taco Night” to benefit ovarian cancer, volunteering medical help at a bike marathon for multiple sclerosis, providing a family with holiday gifts in conjunction with Citizens Against Domestic Violence, and assisting for a day at an emergency aid center.

This year in Columbia, Johnson and his class gathered more than 60 coats for children grades kindergarten to 12th grade, which, according to faculty, is the most successful coat drive to date. The coats were donated to Columbia Public Schools in the fall.

“Each year, there are kids in our community who do not have coats to make it through the harsh Missouri winters,” Johnson says. “We wanted to do a project that had immediate impact.” 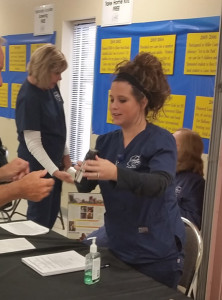 Davis and his class volunteered their time at the Eldon Health Fair in Eldon, Missouri. They assisted with taking blood pressure, measuring Body Mass Index, conducting vision tests and educating people about health. The Lake of the Ozarks’ nursing Class of 2015 is so dedicated to service, the 15 students comprising the class conducted a second project, this time collecting food for Operation: Food for Christmas. They will deliver the donations to the Share the Harvest Food Pantry on Dec. 16.

The two class presidents say their fellow students went above and beyond to participate in the projects and aid their communities. “Working together with classmates on a project that had a positive impact was really amazing,” Johnson says.

And more than that, they’ve realized the importance of support. Though students often feel the stress of classes, jobs and other responsibilities, they know it will get better in the future when school is over. Others who are not as fortunate, Davis says, do not have that “light at the end of the tunnel.” These projects not only benefit the students in learning how to develop the attitude of servitude that is necessary to be a nurse, but the projects also support those in the community as much as possible.

“The positive impact may be short-term or long-term,” Davis says, “but as long as you’re able to make someone’s day better or help them make themselves better, it’s worth it.”

I solemnly pledge myself before God and in the presence of this assembly to faithfully practice my profession of nursing. I will do all in my power to make and maintain the highest standards and practices of my profession. I will hold in confidence all personal matters committed to my keeping in the practice of my calling. I will assist the physician in his work and will devote myself to the welfare of my patients, my family, and my community. I will endeavor to fulfill my rights and privileges as a good citizen and take my share of responsibility in promoting the health and welfare of the community. I will constantly endeavor to increase my knowledge and skills in nursing and to use them wisely. I will zealously seek to nurse those who are ill wherever they may be and whenever they are in need. I will be active in assisting others in safeguarding and promoting the health and happiness of mankind.