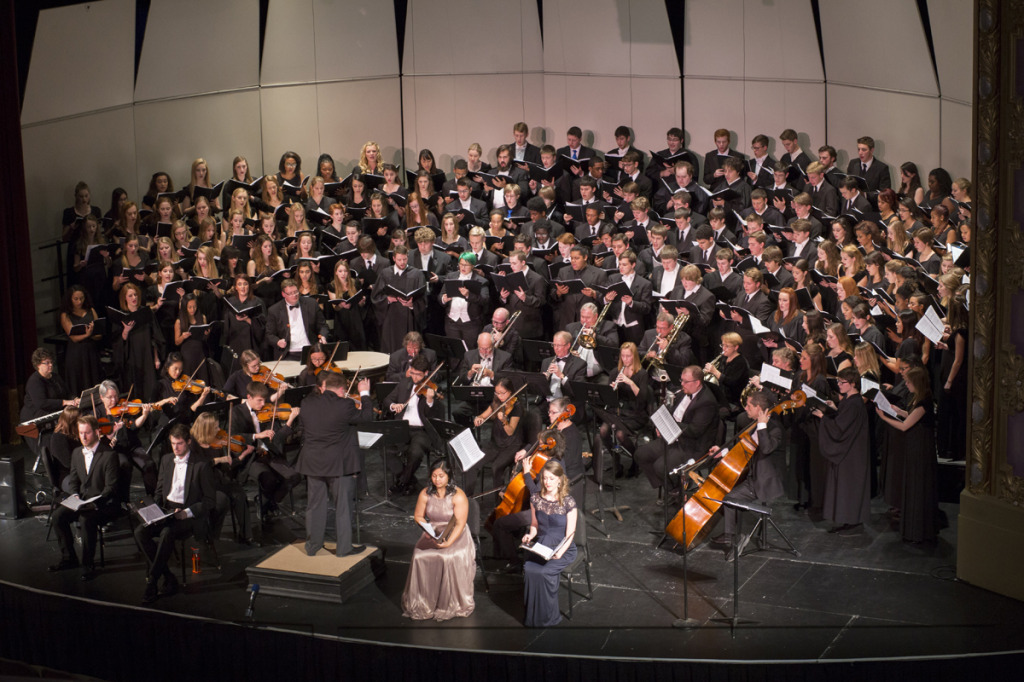 A group of students from every  walk of life came together to put forth a joyous noise inside The Missouri Theatre on November 24, as part of Columbia College’s Amici Musica! combination choir concert.

“On behalf of Columbia College, I would like to welcome you to a celebration that has been literally 30 years in the making,” Moore said to the more than 800 people in attendance. “I say that this concert has been years in the making because tonight represents the public return of the Bachelor of Arts in Music degree. The choir is made up of the Columbia College Jane Froman Singers, who are from a wide variety of disciplines. However, nine of them make up the first class of music majors since 1983. And for this reason, we celebrate!”

The magical evening started with four powerful numbers by the Jane Froman Singers, with accompaniment from the Columbia Civic Orchestra. The choir showcased its amazing range and ability, tackling several different styles of music throughout all four pieces. Of note, the group will perform the songs at Carnegie Hall in New York in May.

Whether it was the fast-paced aggressiveness of Ola Gjeilo’s Dark Night of the Soul, which featured the voices and the orchestra intertwined beautifully throughout or the heartfelt final number, I Hear Music in the Air by Moses Hogan, the Jane Froman Singers were up to the challenge and were treated to a standing  ovation from the crowd.

As the lights came up and the enormous group of performers emerged, anticipation amongst the crowd was palpable. Prior to the opening of the mass, Moore recognized Columbia College’s vice president and dean for Academic Affairs, Dr. Terry Smith, for his commitment and support to bring the music program back to Columbia College.

“It has been a personal goal of (Dr. Smith’s) to see the return of the music program,” Moore says. “Smith is a lover of great music, and particularly of Mozart. So tonight I would like to dedicate this convergence of friends of the art and this performance of Mozart’s Mass in C major to our friend, Dr. (Terry) Smith.”

As Moore’s baton dropped and the opening movement of the six-part mass began, a wall of amazing sound mesmerized the crowd. Noted as a favorite by many students, the third movement known as Credo showcased how talented this group was and the focus they possessed.

“I liked the diversity and coming from a smaller choir and being able to match perfectly with all of the other voices was amazing,” 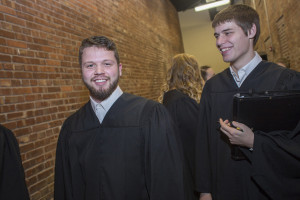 David McReynolds (left) and other tenors from the Jane Froman Singers take the stage! (photo by Kaci Smart)

David McReynolds, tenor in the Jane Froman Signers says. “Working with the younger students was great. Sometimes we helped them out and sometimes they helped us out. They helped us with rhythm and we helped them with tone quality; it went pretty hand-in-hand.”

As the last note of the final movement, Agnus Dei, rang throughout the theatre, the room exploded with applause. Following the event, a very pleased Dr. Smith walked toward Moore to congratulate him on the successful effort. He said he had been looking forward to “this concert for more than 18 years,” his entire tenure at Columbia College and this gathering of Amica Musica!