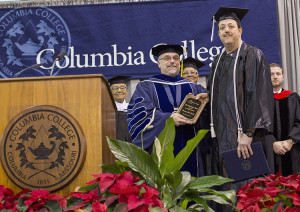 Thomas Banks seemed truly shocked to be named the Presidential Award recipient at Saturday’s December commencement ceremony. Perhaps to build suspense, Thomas’ name wasn’t said until the end of significant biography was read by the president. Then, after a pause, the crowd seemed concerned Thomas, who had just a few minutes earlier walked across the stage, had left the building.

He walked to the stage and stood in front of hundreds of applauding audience members as he shook President Dalrymple’s hand and received a plaque with his name.

Despite his reaction, Banks shouldn’t be surprised by this award. He graduated with an associate degree from the college in 2010 and now holds a bachelor’s degree in business administration. Like many Columbia College students, he also works full time. He is a maintenance leader at Schneider Electric, where he has worked for 23 years.

What made Banks stand out was his willingness to continue learning. When faced with the choice of electives, Banks wanted to make sure he took the opportunity to expand into areas that might someday be useful. He was pursuing education for the sake of education.

In addition, his personal finance instructor, Alan Lester, said of Banks, “He was well prepared for class. He also assisted other students who were having difficult understanding some concepts and even some of the math.”

It is just that interest in education – his own and others – that makes Thomas Banks an exemplary examples of a Presidential Award recipient.