Commencement is a special day in the world of higher education. Families beam with pride as their graduates walk across the stage, successfully completing their academic journey. Speakers offer hope, inspiring graduates to dream big and push pa 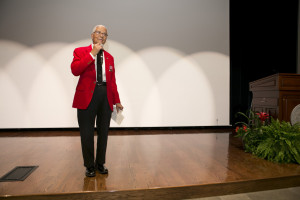 st what they thought was possible.

December’s commencement ceremony will be particularly special for one member of the Columbia College family, Col. Charles E. McGee. For the first time in nearly thirty years, the college will award an honorary degree, presenting McGee with a Doctor of Humane Letters. An honorary degree is awarded to an extraordinary individual who demonstrates the values the college champions in its mission and goals.

McGee is best known as a member of the Tuskegee Airmen, a group of African American fighter pilots who helped break down racial barriers in World War II. While his service and valor are well documented, an important part of McGee’s journey was his pursuit of a college degree, which brought him to Columbia College-Kansas City.

In 1978, McGee graduated with a business degree, and went on to serve as president of the Tuskegee Airmen Association from 1983-85 and 1998-2002. During his tenure, McGee placed an emphasis on scholarships and aviation and space careers for minorities, reflecting his commitment to higher education.

Throughout his life, McGee has demonstrated outstanding achievement and service, and truly represents the college in the best possible light. His achievements and personal character make him worthy of this honorary degree. To make the day truly special, McGee’s daughter Yvonne, and his son, Ronald, will be on hand. Ronald’s daughter, Dr. Charlene Smith, also will be in attendance. Ronald McGee, a retired Air Force captain, will provide the commencement address.

As part of a recent visit to the college, Col. McGee sat down with members of the public relations department, sharing his insights on life and how people can work together to make their communities better. Please enjoy a video of that conversation below: