Mary Morgan: In her own words

Columbia College will say goodbye to one of its longest-held employees Jan. 16. Mary Morgan, director of the Redstone Arsenal campus, will retire after more than three decades of service to the college.

Morgan traveled the world as an Army wife before her husband was stationed at Redstone Arsenal in 1978. Equipped with a master’s in education from the University of Texas-El Paso with English as a second language and reading specialist tracks, as well as extensive volunteer experience with military populations, the newly formed Alabama campus provided Morgan with the chance of a lifetime. She was poised to nurture a fledging campus into a thriving segment of the Columbia College Division of Adult Higher Education.

When tragedy struck Morgan’s home front, however, the support Morgan received from Columbia College turned the Redstone Arsenal campus into something more than a job. It became home.

As Morgan begins the next chapter of her life, and the Redstone Arsenal campus approaches its 40th anniversary in March, she reflects on her time with the college and looks to what the future holds.

November 2014 marked your 33rd anniversary with Columbia College-Redstone Arsenal. What brought you to the college? 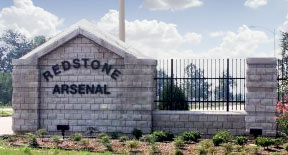 Then the Army approached me about creating and directing a basic skills education program for servicemembers who needed their GED. Frazier Moon [the dean of the Columbia College Extended Studies Division (AHE)] heard about me, and they needed a director for the Redstone campus. When I became director, I started off with 50 enrollments and a part-time administrative assistant.

The staff I have now has been with me for 18 years – one retired Army wife, two retired Army veterans and one Army “brat.” We are a very close-knit staff and that’s why it has worked.

It’s uncommon these days to find someone who stays with the same company or organization for as long as you have been with Columbia College. What has made you stay?

In 1991, my husband, who had retired from the Army as an engineer and went to work for an engineering firm, died suddenly of a heart attack. It hit me so hard. But Columbia College, Frazier and President Ruthenberg were so good to me – President Ruthenberg came personally to see me – he helped me grow. Frazier allowed me to go to the different Nationwide campuses, in California, New York, to help the other directors with their commencement ceremonies, and travelling helped me. 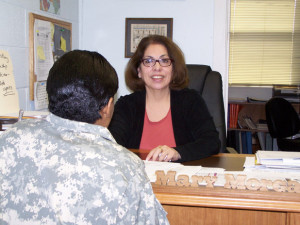 I love what I do, advising my soldiers and veterans. Columbia College has been so good to me, so why would I want to leave? The time went very quickly. Thirty-three years. So many of my alumni show up at my doorstep to visit. I see them at the commissary or the PX and they give me a big hug. They are family.

What is your favorite memory of your time at Columbia College?

The commencement services. Way back before we started giving rose notes, we gave flowers to the spouse or the grandmother of the graduate. I would call each of these people individually and give them the flower and tell them, “Your son, George, asked me to give you this rose.” The student didn’t get the degree alone; it took the family.

Tell us about your family and your future plans.

My daughter, Kay, and her husband, Glen, live in Little Rock, Arkansas. They have given me two granddaughters, who are teenagers. My son, Jeffery, lives in Atlanta, Georgia, and he has given me three granddaughters. I teach them how to do things when they visit me. They cook with me. They learned how to do pigs-in-a-blanket, banana pudding and how to put on a dinner party. These things are important. And I’ll be able to help advise the teenagers when they go to college.

Do you have any words of wisdom or advice for current and future students?

Never say never. Because it can happen, “it” being your degree. Just with anything, actually. It can happen. I work with students who think they’re too old. They’re not! It’s never too late. The opportunities are there. Take them.