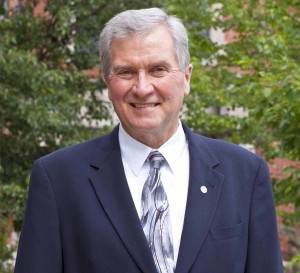 Columbia College recently hosted the Women’s Intersport Network awards luncheon, an event that celebrates outstanding female athletes in the community, as well as those who support women’s athletics.

At the luncheon, Dr. Terry Smith received the 2015 Kent Heitholt Memorial Award, which recognizes individuals who have a positive influence and support women in sports. Dr. Brouder received the award in 2013.

Over the years, Dr. Smith has been very supportive of women’s athletics, which are comprised of volleyball, softball, golf, basketball, cross-country and soccer. Dr. Smith also played a key role in the soccer field improvements and the construction of a new press box, both of which will be completed this year.

Lindsey Martin, a Columbia College student, also was honored at the event, as she was one of three finalists for the 2015 Collegiate Sportswoman of the Year. While posting a remarkable career as a member of the college’s cross country team, Martin also has been heavily involved in the community, volunteering her time to the Special Olympics.