The chips may fly: Accounting faculty member doubles as artist 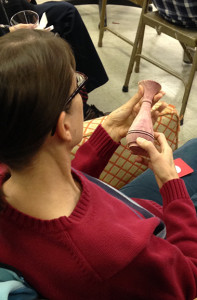 Those who attended the wood turning exhibit watched as Stauder created this vase in approximately five minutes – starting from a log that included bark.

Tom Stauder, instructor of accounting at Columbia College, spends much of his free time crafting works of art with his lathe. In a recent demonstration as part of his art show in the Greg Hardwick Gallery, Stauder says he never considered himself an artist.

All evidence (below) to the contrary.

In the hour-long presentation, Stauder explained how he began working with wood (he decided to build a house with the help of his architect father). His progression from simple furniture for his new home to complex and creative wood-turned artwork has happened over time. During his presentation, Stauder took roughly five minutes to showcase the creation of a vase (shown to the right). In a matter of minutes, the chips flew and the audience was able to hold the newly formed vase for themselves.

Stauder’s work is on display until Feb. 20.