“Education is the key – with it, you can survive anywhere”

It is not surprising that Dut Deng lists Abraham Lincoln as one of the people he admires most. Deng is a 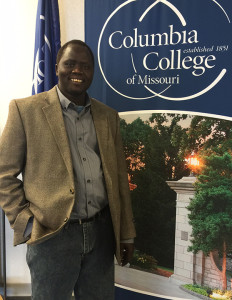 living example of this Lincoln quote from 1860:

After losing his parents in the civil war that raged in South Sudan, he fled from the poverty-stricken country in 1987. It took Deng, and many of the other unaccompanied minors who fled with him, more than 13 years to make it to America after stops in two other countries. They migrated from country to country in search of a home, witnessing death, destruction and unrest. The heartbreaking plight of this group of children, who became known as the “Lost Boys” of Sudan, was recently profiled in a touching and insightful film called “The Good Lie.”

On December 4, 2000, Deng’s path finally led him to America and to central New York where his “singleness of purpose” has been improving his stake in life and helping others both in the Syracuse community and in his home country. After attending Onondaga Community College, Deng enrolled at the Columbia College-Hancock Field campus in Syracuse where he is currently working toward a degree in criminal justice with a minor in business administration. He expects to graduate in 2016.

You would not expect this kind of description of someone who has had the kind of experiences Deng has had during his life. But as he recalled recently in an interview on WSNY’s Bridge Street television program, “we ran away from the Sudan, we went to Ethiopia, we walked to Kenya, and it’s a long walk, a lot of miles to go through, no food, no water, no nothing. But you can live when you have hope, when you have patience and you have to know there will be a tomorrow.”

“Education is the key – with it, you can survive anywhere,” Deng says. “It is the master key to open all doors.  I can see the difference between me and my parents – they couldn’t read or write. I am so happy that I can do that. Most people back in my village don’t know what education means. I hope to open their eyes to education – it is very important.”

Deng, who is 35, has launched the South Sudan Initiatives. Inc. (SSI) (www.southsudaninitiatives.com) to spread his message of the value of education and scholarship. The mission statement of the initiative states that it “… is to better the lives of young men and women known throughout the world as “Lost Boys” and “Lost Girls” and to repair the damage that decades of war have inflicted on religious, agricultural, economic, social and cultural life in South Sudan and surrounding areas.”

Deng’s goal is to one day provide a scholarship for children and women back in his village to attend college. He continues to make progress toward his degree while working at Syracuse University as a residential maintenance coordinator.

“He lives his life and models compassion, grace, humility – all of the characteristics that we hope to achieve in our lives, and in our relationships,” Vinciguerra, who also serves on the South Sudan Initiative’s board, says. “He teaches others how to be better people.”

On February 12, the Washington Post published the Top 5 snowiest cities in America so far this winter. It was no surprise that Syracuse, New York, came in at Number 5 with 74.7 inches of snow so far. More than 6,500 miles away, South Sudan is listed as one of the Top 10 driest places on Earth averaging just over 41 inches of precipitation in a year.

To say acclimating to Syracuse, New York from South Sudan has been challenging would be a bit of an understatement. The climate (let alone the culture) is hugely different. For instance, just this year, Syracuse was named to the list of snowiest cities in America, while South Sudan was one of the Top 10 driest places on Earth.

Despite it all, Deng has handled it well, much like everything else he has gone through in his life.

“I have noticed and grown to understand Dut in a variety of ways,” Vinciguerra says. “Most critically, his persistence toward earning his degree and the patience that he has toward humanity. For someone that has seen the brutality of the human condition, his resilient spirit carries on.”

That resiliency and desire to be a leader has served Deng well. After coming to America with no belongings, he has scraped and saved and now owns his own apartment.

“When I came to America, I had nothing,” he says. “And then I began to have hope and started to go to college, and I got a job to support myself … I wanted to own something … I’m not the lost boy I used to be 14 years ago. We are living the American Dream now.”