Students travel to New Orleans for an alternative spring break 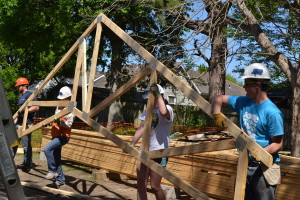 For many college students, spring break is a chance to set out on a good old-fashioned road trip. And while some choose tropical locales to observe this most glorious week, a group of Columbia College students decided to “laissez les bon temps rouler” (French for “let the good times roll”) in New Orleans.

To raise the funds necessary to embark on the trip, Mitchell Smith, a Columbia College student, and others sold candy, hosted a trivia night and reached out to family and friends. The group ultimately raised more than $4,000 for the trip.

Much of the group’s time in New Orleans was spent at the construction site. Each day, the group broke into smaller teams with specialized tasks such as measuring and cutting wood, placing boards on frames and hammering nails into studs. The group quickly made a name for themselves, with one of the Habit for Humanity members noting that they “did a whole lot, especially for a small group!”

While the students displayed a steely work ethic, they also had a chance to cut loose and experience New Orleans’ rich culture. During the group’s first full day in the city, they immersed themselves in the legendary French Quarter, taking in the abundant live music and shopping. The group even had a chance to have their fortunes read, with the fortune teller accurately predicting the students would return to New Orleans.

The unique experiences they had in the French Quarter, along with the satisfaction of helping a community rebound after a natural disaster, had an impact on the group.

“It just warms your heart,” says Smith, who also helped organize the trip. “It makes me want to keep coming back to this town to help all of those still struggling from Hurricane Katrina.”