A wish for graduation

For Heather Frayer, whose life’s struggles have included being laid off from a factory, caring for a child with cancer and a home that was destroyed by fire, it’s certain that life is full of personal trials. There might seem to be little joy in life.

This Saturday in Memphis, if only for a short time, those trials faded to the background.

At a small church aptly named Church on Edge, located at the edge of bustling downtown Memphis, Tennessee, Rolla campus student Heather Frayer realized a dream in the company of close friends and family: Her three children witnessed her graduate. With her 10-year-old son Andrew fighting for his life against Ewing sarcoma, a bone cancer in children, this dream was special. 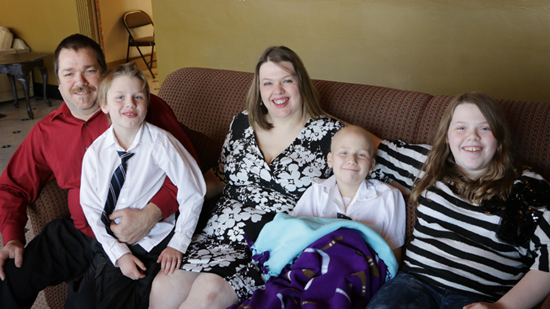 Three weeks ago, Sylvia McKelvey, founder of Memphis-based nonprofit organization Three Wishes for Her (3W), which provides support to female caregivers of critically ill children, contacted Columbia College-Rolla director, Kim Bonine, with an idea. With Andrew receiving another round of chemotherapy treatment at St. Jude Children’s Research Hospital in early April, McKelvey knew Frayer would not be able to attend the April 4 Rolla commencement for her bachelor’s degree in business. But perhaps Columbia College could remedy the situation.

3W made arrangements to host the event at the church, while Columbia College staff made the six-hour trip to Memphis with graduation treasures in tow, including a cap and gown, an Alpha Sigma Lambda cord and, of course, Frayer’s diploma.

“I knew that I was going to get my degree. I didn’t know there was going to be a ceremony for me,” said Frayer. “It was a nice surprise. I think everyone went above and beyond today.”

With her husband, Tim, and children Cassandra, 13, Nicholas, 8, and Andrew watching from the front row, Frayer walked across the church stage adorned in Columbia College regalia to accept her diploma from Massey, who conferred the degree and provided the commencement address. Massey conducted the ivy chain ceremony for Frayer, as well as inducted her into the Columbia College Alumni Association.

“It’s just been so important to Heather for so long, therefore it was important for the rest of us to see her succeed,” Tim said.

The long, hard road to graduation

Frayer first completed her associate degree in business from Columbia College in 2008 with the help of a tuition reimbursement program offered by the factory where she was employed in Rolla. She was preparing to begin her bachelor’s degree when the factory shut down, laying off Frayer – and Tim, which is where the couple of 14 years met. Frayer had planned on going back to work when their youngest child, Nicholas, started kindergarten. But when Andrew was diagnosed with cancer in March 2012, her studies were put on hold again – and things would only get worse.

In October 2012, seven months after Andrew’s diagnosis, the family was at St. Jude with Andrew during his treatment when Tim received a phone call in the middle of the night. Their house four and half hours away in Rolla was on fire. It would be a total loss and the cause of the fire would never be determined. Five months later, the family was still struggling to pick up the pieces when Andrew received a bone marrow transplant in March 2013. Soon after, he was cleared to go home with a clean bill of health. 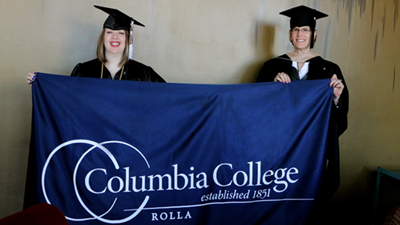 With her caregiver duties lightened, Heather was able to return to her studies. She was finishing the last of her courses in January 2015 when Andrew’s symptoms returned.

“He needed to come back to Memphis and, unfortunately, his cancer had returned and it’s in a different spot. He’s getting chemo and radiation because it’s very serious this time around,” Frayer said.

With Frayer back to spending time in Memphis, she continues to find emotional, physical and spiritual support from McKelvey and the women of 3W, whom she met shortly after Andrew began receiving his first round of treatment in 2012.

“When Heather gets it in her mind to do something, Heather will do it. She is really persistent that way,” said McKelvey. “That is one of things that I really do love about her because she is a goal-setter and once that goal is set, you can say it’s done. Her education is no different.” 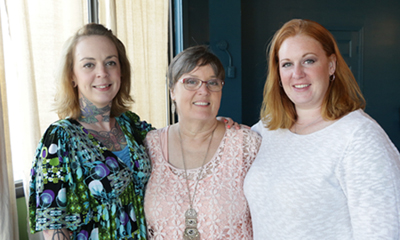 With degree in hand, Frayer now looks to the future with many things on her mind — and many wishes in her heart. She is hopeful for a job in advertising that will allow her to save for her dream of opening a bridal and pageant salon. She dreams of raising her children with Tim and helping them receive the same opportunities for higher education that she has had. And she prays for Andrew’s health.

As long as Frayer has these wishes, McKelvey and 3W will be by her side.

“The mission of 3W is all about the women, and this is one of the greatest wishes I have ever seen given to a mom,” McKelvey said. “It was her desire for her children to see her walk across the stage and accept her diploma. And that was a wonderful, amazing gift. I thank Columbia College for all that has taken place today.”