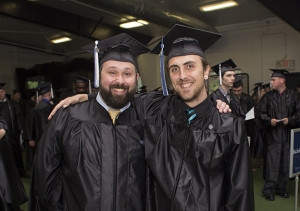 At any given commencement ceremony, you’ll find a wealth of compelling stories. Each student has faced unique challenges along their journey toward a degree, and commencement is their time to celebrate.

So, in an effort to capture some of these great stories and special moments, members of Columbia College’s marketing and public relations departments spoke with graduates at the college’s recent commencement ceremony. One such story comes from two brothers, Jonathan Jarboe and Brett Moore.

Jarboe, who is ten years Moore’s senior, began taking courses at Columbia College-NS Everett/Marysville (which is located in Marysville, Washington) in 2007. As an active-duty member of the U.S. Navy, Jarboe earned a bachelor’s degree in finance. After graduation, Jarboe began work on a master’s degree in business administration.

Moore transferred to Columbia College’s main campus two years ago, and “fell in love” with the college. Since then, he’s worked toward a bachelor’s degree in communication studies.

As Jarboe and Moore neared completion on their respective degrees, it became apparent that they would have an opportunity to graduate together. And while siblings enrolled at the same college might be not be a rarity, the chance to walk in the same commencement ceremony certainly is, which wasn’t lost on Jarboe and Moore.

“It was kind of funny, because I got a call from (Jarboe) in January. He said, ‘Hey, we can graduate together … is that cool?’ And I said, ‘The more, the merrier,’” Moore recalls with laugh.

Throughout the day, it truly was a family affair. The brothers stood together at the Ivy Chain ceremony, with “big brother cutting little brother’s ivy chain,” says Mernell King, the pair’s mother. Their sister, Holly Jarboe, made the day even more special, surprising them by flying in from Manhattan, New York, for the commencement ceremony.

“Graduating with someone like your brother is really cool; you get to see him (walk), and I bet it’s impressive to our mom,” says Moore.

With her sons graduating and the family back together, it’s a safe bet Mom was very proud.