For international student Mingcheng Xia, summer means an opportunity to dig in the dirt, pull weeds, harvest vegetables and reflect on a successful freshman year – for both him and the International Club’s community garden, aptly named “Cougarden.”

After an academic year of planning, the Cougarden project paired international students from Columbia College with local middle school students from varying cultural backgrounds. The International Club took home Service Project of the Year for their efforts at the Student Affairs Night of Recognition April 28. 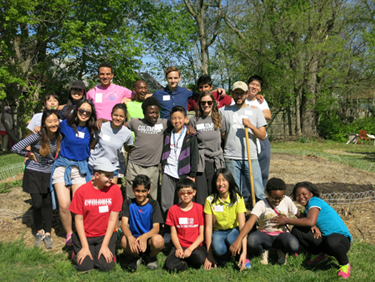 Dean of Academic Affairs Faye Burchard and Associate Dean of Student Affairs Dave Roberts presided over the elegant ceremony at Cherry Hill Events Center. International Club President Michael Brown and International Student Advisor Leah Buretta, who had been nominated for Advisor of the Year, proudly accepted the award on behalf of the club.

Not two hours earlier Brown and Buretta had been working the modest seven-row, raised-bed garden, located on the Kirkman House south lawn. It had been a perfect spring afternoon to host the final workday between the International Club and the English Language Learners down the street at Jefferson Middle School, who reaped the benefits of the club’s labor during the fall semester.

The garden took shape in September 2014. Buretta said the idea for the garden ripened when the International Club was brainstorming activities to keep them busy during the summer and academic breaks when many of their domestic peers go home. A grant from the Columbia Center for Urban Agriculture, whose executive director Billy Polansky is an MBA student at Columbia College, helped to provide seed money – quite literally – for the garden. 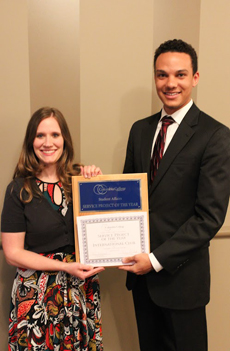 “By growing fresh produce, students get to eat healthy food, gain new skills and learn about foods that grow in America,” said Buretta.

When spring came, Buretta saw an opportunity to nurture Columbia College’s Partners in Education relationship with its neighbor Jefferson Middle School. Since the end of March, the ELL middle schoolers have walked down Rogers Street after school every Tuesday to work with the International Club – but not just to plant and harvest vegetables.

Carla Hurtado, ELL teacher at Jefferson Middle School, said the ELL students are unique in that they have been in the U.S. for fewer than 12 months and know little of the language or culture. The ELL program is intended to help them become more proficient in both.

But for an hour every Tuesday, the ELL students were welcomed to return to their native roots and connect with the college students who share many of the same experiences being abroad.

“A lot of these students did sustainable farming back home but haven’t had the opportunity to do it here,” said Hurtado of her ELL students. “They were really excited. They asked a lot of questions about the opportunity to meet people from their countries and speak their native language.” 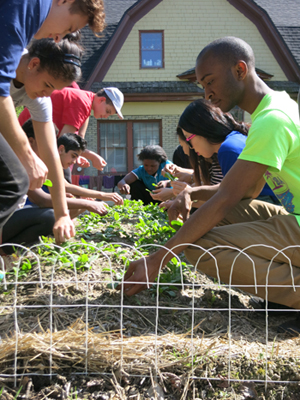 International college and middle school students work together to harvest the spinach they planted a few weeks earlier.

Bahati, a sixth grader from Uganda, and Sonia, an eighth grader from Rwanda, were old hands at gardening. In reflecting upon their Cougarden experience, both said they enjoyed shoveling and planting the most. Reda and Noah, seventh and eighth graders from Iraq, placed friendly bets with each other on how long it would take the seeds to grow.

The Columbia College students enjoyed the gardening, too. Misu Kim, an exchange student, and Yeseul Kim, a Day campus student, both enjoyed working with the middle schoolers and speaking to them in their native Korean.

“In Korea, I don’t usually have the chance to grow something in the big city,” said Kim. “And I was glad to meet the young students.”

For Xia, any chance to work in the garden continues to be the best part of his day. He says he’s been waiting for spring for a long time.As the school year winds down, spring has just begun. In the coming weeks, the lettuce, carrots, garlic, potatoes, bok choy, spinach and flowers that were planted during the hours of fun and friendship will soon come into season.

International Club members like Xia who will stay the summer plan to harvest and donate the crop to charitable organizations in the community, such as City of Refuge, that can benefit from fresh produce.

Come August, the students will return and the garden will be ready for another fruitful season, another opportunity for everyone under the sun to grow together. 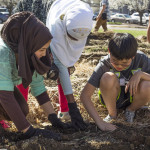 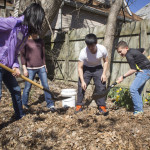 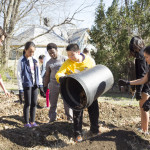 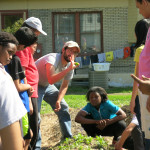 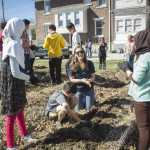 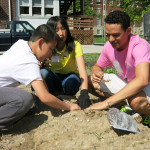