Education has no age limit 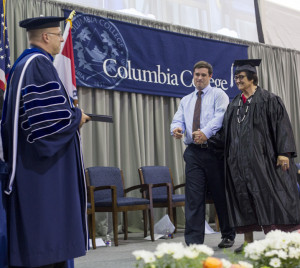 Before a packed crowd in the Southwell Complex at Columbia College’s May 9 commencement, Laurel Dale crossed the stage to accept her bachelor’s degree. The 77-year-old graduate of the Moberly campus was assisted by her grandson Taylor, who travelled from Jacksonville, Florida, for the occasion. As President Dalyrmple handed her the diploma, a smile of pride crossed Dale’s face.

“Walking up to receive the diploma – that was truly special. I kept wondering if this was really happening,” Dale recalls.

Dale completed her degree entirely online – but when she started in 2009, she didn’t yet know how to use a computer. In fact, she didn’t even own a computer. But growing up as one of 11 children on a rural Missouri farm in the wake of the Great Depression, Dale learned early about overcoming obstacles, and the value of an education.

“She was such a strong believer in education,” Dale remembers of her mother, who wished to see all 11 children receive a college education. “Because that’s what will bring you out of poverty – if you work hard, getting your schooling will help you all of your life.”

After graduating high school in 1955, Dale attended one year of college at the University of Missouri. In 1958, she married her high school sweetheart, Jim Dale, and they started their lives together, which included raising three children.

Through the years, the couple enjoyed life. Dale worked at Buchroeders Jewelers and Boone County National Bank in Columbia. The children grew and gave the couple seven grandchildren. Then Jim died in 1997. Living in Macon, a half-hour drive from Moberly, Dale finally heeded a call in 2009.

“I just had an intense desire to return [to school]. I felt it so badly in my heart. Columbia College is a highly thought-of school. Then I found out they had online classes.”

The Moberly staff immediately got to work helping Dale acquire the computer skills she needed to succeed in online coursework. Her first step was to take an introduction to computers course – a course she took online. 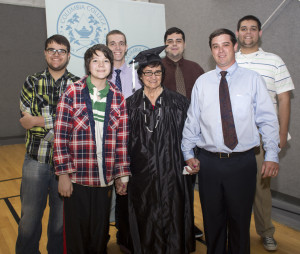 Laurel Dale with her son and five of her seven grandchildren.

That course laid the foundation for her to complete the remainder of her online coursework. She said taking online courses was ideal because it allowed her to work at her own pace – and get a little help from family.

“I remember typing a four-page paper for one of my classes and it all wiped out [on the screen],” Dale remembered. “I cried and then my grandson Stevie said, ‘Grandma, you see this button at the top that looks like a fishhook?’ He pushed that button and it all came back,” she laughed.

Dale’s grandsons weren’t alone in helping her along the way. Dale credits positive reinforcement from her online instructors, support from the college’s technology services department and guidance from the Moberly staff in helping her stay on track.

The concept of online education has opened a new world for Dale, and with her Bachelor of General Studies in hand, she has big plans for the future. She believes that keeping the brain active is key to combatting memory loss and dementia as we age. She hopes to set up a program for senior citizens to help them learn how to use computers and access online “brain games” like those offered by the popular Lumosity website designed to exercise memory and attention. She is even interested in completing a research study on the subject. 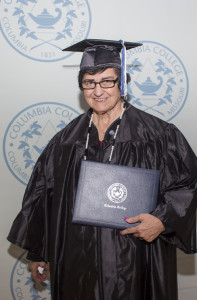 Laurel Dale stands proudly with her Bachelor of General Studies.

From the Depression-era farm girl who could not have conceived of the computer age to the grandmother who completed her college education through the power of the internet, Laurel Dale is a reminder to students across the generations of what can be achieved through adaptability and perseverance.

Her advice to students?

“The same advice as my mother had: Education is gold in the brain. The most important decision in your life is to go forth [with school], and you’ll be rewarded, you’ll enjoy it, you’ll be hungry for it, you’ll want to do more, you’ll never give it up once you start.”

More on this story: