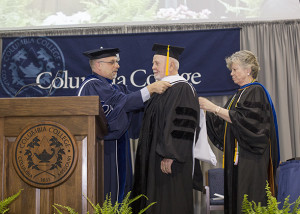 At its recent commencement ceremony, Columbia College awarded an honorary degree to Jim D. Morris, a Springfield, Missouri-based philanthropist. Known throughout Missouri for his generosity and commitment to higher education, Morris was presented with a Doctor of Humane Letters at the ceremony.

“Jim Morris represents all that’s great about Missouri,” says Michael Kateman, executive director of Development, Alumni and Public Relations. “He’s been very active from a civic and philanthropic standpoint, and he believes in access to higher education. There’s not a better way to honor him than to provide him with an honorary degree.”

While he is well known for his success in petroleum and real estate spaces, Morris’ philanthropic endeavors have made an indelible impact on Missouri. Morris has provided sizable contributions to the arts, charities and higher education. In 2011, he made a donation of property to the college, which now houses the Columbia College-Rolla campus.