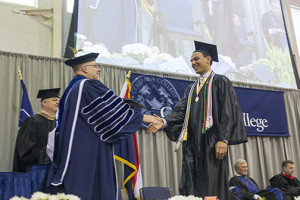 When he was a senior in high school, Michael Brown got a crash course on what Columbia College is all about.

Brown, who hails from Montgomery City, Missouri, was selected as one of the college’s five Columbia College scholarship award winners (which awards full tuition and room and board). Working with Brown’s parents and teachers, the college’s admissions department devised a plan to surprise him with the life-changing news while he was around his peers.

As Brown sat in class, college staff began to file into the room. Under the guise that they were on hand to shoot a commercial, the team worked feverishly to set up a camera to record what happened next.

When the moment was right, a member of the admissions team bounded into the classroom with a bullhorn, announcing to Brown and his classmates that he had just received a full-ride scholarship. It took a few moments for everyone to fully grasp what was happening, but when Brown saw his parents, it finally sank in; all of his hard work had paid off. Big time.

Since he’s been at Columbia College, Brown has lived up to the high expectations that were established that day at Montgomery City High School. Brown, who is graduating with a bachelor’s degree in forensic science, was honored at commencement with the Presidential Award, which recognizes a select group of students who have a track record of success in the classroom, as well as the college community.

Outside of the classroom, Brown has been heavily involved in student organizations, such as the Science Club and the Emerging Leaders Institute. He also has been involved with the college’s international programs, culminating with a study abroad experience in Japan. Brown also gave the class address at the Ivy Chain ceremony, and plans to spend the next year gaining additional lab experience in preparation for medical school.

Watch the video of Brown being surprised by the Columbia College ‘Prize Patrol’ below: