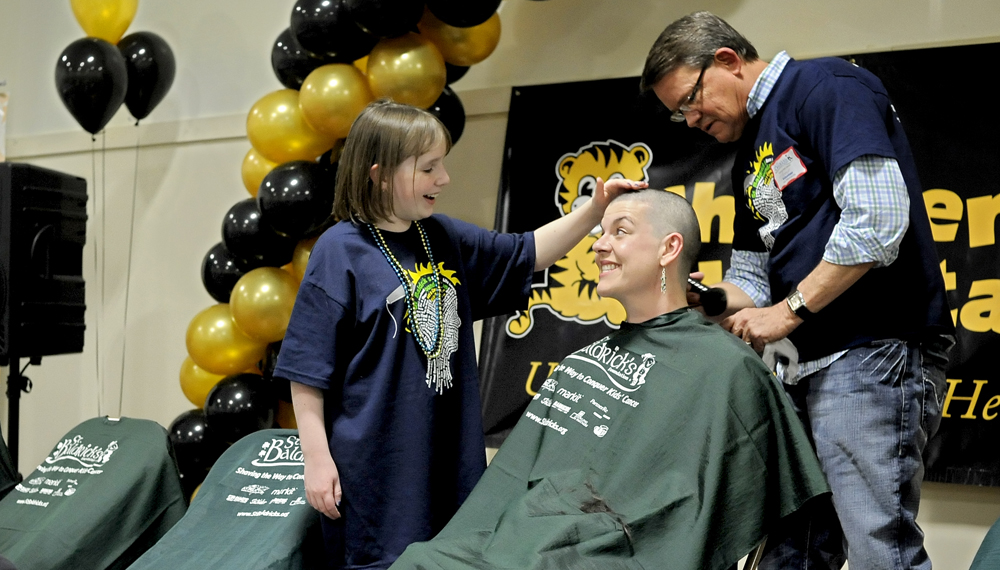 Columbia College alumna Melanie Dollens was a “shavee” for St. Baldrick’s Foundation for the first time in 2011. She is pictured here with her daughter, Morghan, immediately after her first shave. Photo by Parker Eshelman/Columbia Daily Tribune

Sitting at her kitchen table in December 2010, Melanie Dollens ’14 decided she needed a new direction for the terrible angst she felt at that time every year. It wasn’t due to the stress of Christmas gift shopping for her tight-knit family, or figuring out how many strings of lights she needed to decorate their house for the holidays.

Each December, her daughter Morghan visited the oncologist to determine if the medulloblastoma had returned.

“I just remember sitting in my chair going ‘Oh my God, I can’t continue to do this every year, this focus on Morghan and is her cancer coming back?’ “Melanie says. “I wanted to go another direction and not focus on that.”

Melanie came across information about the St. Baldrick’s Foundation, a volunteer-driven charity that raises money to fund research of childhood cancers and gives survivors a better quality of life. The organization holds headshaving events across the country as fundraisers for the research, instilling hope in those affected by childhood cancers.

Intrigued, Melanie discovered the University of Missouri School of Medicine was organizing their first St. Baldrick’s head shaving event the following March. She knew immediately she wanted to participate.

“I said, ‘I’m going to do that. This is what I am going to focus my energy now.’ I was actually their first shavee to sign up!”

Morghan was diagnosed with medulloblastoma in December 2005, at age 6. The symptoms had only emerged earlier that month when she began stumbling and experiencing double vision. Melanie, who was a licensed practical nurse, and her husband, Andy, knew immediately that something was wrong. They took Morghan to their primary care physician.

“The CT scan was like a train hitting you in the gut,” Melanie says, fighting through tears. “The first day you’re going ‘I can’t even pronounce this, let alone what the heck is this?’”

Morghan had surgery to remove the tumor from her brain and was pulled from kindergarten to avoid infection. She also had radiation with chemotherapy for six weeks before eight additional six week cycles of chemotherapy. Throughout the entire process, Melanie says that Morghan was extremely upbeat and mature about the situation.

Following the year of treatment, the Dollens family received the great news they had been waiting for: In December 2006, Morghan no longer had any evidence of the disease.

After putting her whole being into Morghan’s fight and recovery, Melanie continued to work as an LPN and care for her husband and their burgeoning family of five kids. With all her children in school, and Morghan six years in remission, Melanie wanted a new challenge.

“My husband encouraged me to go back and get my RN, so that was kind of what influenced it,” she says.

Melanie enrolled at Columbia College to work toward her associate degree in nursing. She thrived both in the classroom and in the clinical setting.

“It was tough,” she admits. “I had an advantage having been an LPN and having worked in health care, but from day one, we were in there taking care of patients, which other programs don’t necessarily do.” 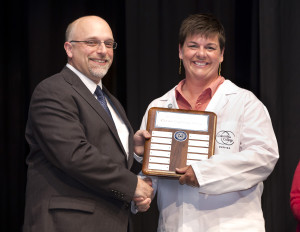 Columbia College President Scott Dalrymple (left) presented Dollens with both the Clinical and Educational Excellence award during the May 2014 Nurses Pinning.

In May 2014, in front of Andy, Morghan and the rest of her proud clan, Melanie graduated with her degree and passed the NCLEX (The National Council Licensure Examination), making her a registered nurse. At the nurse’s pinning ceremony, she was honored with two awards, earning both the Academic and the Clinical Excellence awards for the May 2014 class.

Melanie’s educational journey didn’t end there. She is currently working toward a bachelor’s degree in nursing at Columbia College, and she expects to graduate in 2016. The newly launched degree program offers online courses for current RNs. She also works weekends at the University of Missouri Hospital in the neuroscience unit, providing direct care to patients who have had strokes, spine surgeries, seizures and other neurological issues. Her unit also cares for patients, just like her daughter, who have had brain tumors removed.

“Hospitals are wanting (nurses to have their bachelor’s degree in nursing), so I knew I wanted to continue on and have as big an arsenal of tools in my bag as I can,” she says.

While completing her prerequisite for the BSN program, Melanie continues to volunteer and raise money for research for families with young children who have been diagnosed with cancer. She also attends her family’s art exhibits, football games, choir concerts and a myriad of other events.

One event she is especially looking forward to is coming up next week. Melanie will make a return visit to the barber’s chair, shaving her head once again, this time as part of the “46 Mommas Shave for the Brave” organization, an offshoot of the St. Baldrick’s Foundation that was named in honor of the 46 children who are diagnosed with cancer every weekday in America.

And you can bet Morghan will be there by her side, cheering her on.

* This article is featured in the summer 2015 edition of Affinity, the official magazine of the Columbia College Alumni Association. Check out additional content on alumni around the world via this link!