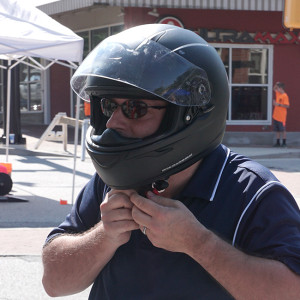 Downtown Columbia served as the backdrop for the annual Columbia Downtown Optimists Club Soapbox Derby event on Sunday, June 7. This fantastic event, which has taken place annually since 1938 in Columbia, is designed to “bring out the best in kids” says event organizer Rich McKernan, requiring a combination of science, technology, engineering and math.

While the event’s focus is the younger generation, Columbia College President Scott Dalrymple was among a group of celebrity racers invited to join in the festivities. He took on veteran soapbox derby pilot and Columbia Superintendent of Schools, Dr. Peter Stiepleman in what turned out to be a nail biter of a race. Did he emerge victorious? Read the recap of the race in Dr. Dalrymple’s own words!

The Downtown Optimists Club hosted its annual Soap Box Derby in Columbia. Dozens of kids are racing all day today on Broadway from 7th Street down to Providence— a grade that’s steeper than it looks. I was asked to be a local celebrity racer, going up against Columbia’s Superintendent of Schools, Dr. Peter Stiepleman.

Stiepleman had raced against MU System President Tim Wolfe last year, picking up valuable experience along the way.  Dr. Stiepleman is a polite, amiable guy; but I sensed steely resolution in his eyes. 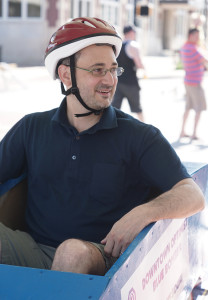 Dr. Peter Stiepelman looks at Dr. Dalrymple as they prepare for their heat.

His demeanor quickly changed when, at the last minute, I donned my full-face motorcycle helmet and racing gloves, like The Stig on BBC’s Top Gear.  (In truth he laughed out loud, but I believe it was a laugh of fear.)

The race itself was intense, with top speeds likely in excess of 12 mph.  Stiepleman pulled out to an early lead, largely because he understood the importance of aerodynamics and kept his head low.  He was fast— I mean American Pharaoh fast.  Luckily he was so far ahead of me that I could easily see and copy his technique.  Inch by inch I gained on him, aided by the extra body weight I’ve been strategically carrying around for years in preparation for this very day.  By the time we reached the finish line, the race was too close to call.

Alas, those clever Optimists had some sort of gizmo that took away all doubt:  I had emerged victorious by 0.02 seconds. 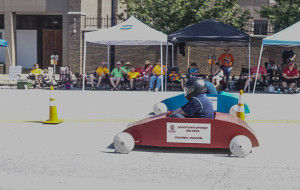 President Dalrymple is just inches ahead of the superintendent for Columbia Public Schools.

I’m told that a substantial trophy will be making its way to the College in the near future.  We will display it with pride; I share it with all of you.  Perhaps it will serve as an inspiration to those whose lives we all endeavor to change.

Willing to do whatever it takes,