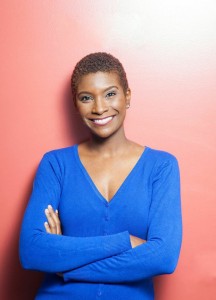 Usually when someone’s perched in a tree taking pictures of you, it’s not a good sign. The plot thickens, though, when that person turns out to be a member of the Siberian paparazzi.

For Anise White ’13, a Los Angeles-based singer, actress and marketing expert, this encounter happened during a visit to Tomsk, Siberia. White had been invited to sing at the Tomsk International Jazz Festival and enjoyed celebrity status upon her arrival: a woman tearfully asked for her autograph as a photographer snapped away from a tree across the street. While she was caught off guard by all of the attention, White saw it as a sign of how far she had come as a musician.

White began singing when she was eight years old. Beginning with arias and operatic pieces, White eventually gravitated toward other styles. Over the years, singing remained one of her biggest passions.

For her undergrad experience, White began at the University of Missouri, ultimately transferring to Columbia College-St. Louis. White took classes sporadically over the next several years while pursuing a career, not quite sure about the direction she wanted to go. After landing a marketing job in New York, New York, White decided the time was right to complete her degree, enrolling in Columbia College’s online program.

“To go back to school and get my degree with Columbia College was huge,” White says. “I’m grateful because it was convenient, and I was supported. I felt like they wanted me to succeed.”

During the months leading up to her graduation, White balanced coursework, a full-time job and an internship at Sony, which gave her access to big moments in the music world.

“I was there the day Justin Timberlake dropped ‘The 20/20 Experience’ (a studio album by Timberlake),” White says. “A lot of people didn’t know it was coming.”

The Sony internship also proved to be a great place to learn, providing her with a unique vantage point of the music industry.

“It’s interesting to see how the music industry has shifted. It used to be that New York was a major hub for music, and it’s not anymore. A lot of music has shifted and moved to Los Angeles.”

Since graduating from Columbia College, White has moved to Los Angeles in an effort to take her music career to the next level. In addition to music, White also has a passion for marketing, with a focus on the entertainment industry. She currently works as an independent contractor, partnering with agencies on various projects and campaigns.

With opportunities that abound in whatever direction she chooses to go, it’s clear that White has learned to embrace the whirlwind pace of her life.