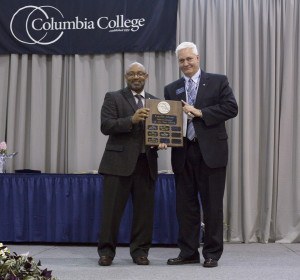 The award recognizes Nationwide campus directors who exemplify the virtues of the late Frazier Moon, a former Columbia College dean who played a significant role in the advancement of the extended studies division, now known as the Division of Adult Higher Education.

“It was truly an honor to receive the Frazier Moon Award. I am fortunate to work with an amazing staff at the St. Louis campus, and they are certainly responsible for many of the accomplishments we have enjoyed,” Steffes said. “I also have some wonderful colleagues at the main campus and at the AHE campuses who, thankfully, never tire of me asking questions and seeking advice!”

Steffes joined the St. Louis campus in 2011 as a Master of Arts in Teaching outreach coordinator before moving into the assistant director position in 2013. Later in 2013 he was promoted to director.

Steffes came to Columbia College after more than 20 years in public education, serving as an English teacher and basketball and track coach in the Columbia Public School system from 1980 to 1991. He then became an assistant principal for Columbia Public Schools from 1991 to 1994 before becoming principal of Lewis and Clark Middle School in Jefferson City from 1994 to 2011. He also spent several years simultaneously teaching as an adjunct instructor at Columbia College, Lincoln University, the University of Missouri and Central Methodist College.