Walk into Executive Vice President and Dean for Academic Affairs Dr. Terry Smith’s office in historic St. Clair Hall and you’ll immediately notice tall white walls reflecting the light that enters through enormous windows. The floor-to-ceiling built-in bookshelves neatly house artifacts that tell of a long and accomplished career. There is a dignified yet approachable presence to the space, which embodies Smith perfectly.

Since joining Columbia College in 1996 in his current role, Smith has made his home in more than one office. Smith made the president’s office home from 2013-14 as he served as interim between the Gerald Brouder and Dr. Scott Dalrymple administrations. Starting in fall 2015, he will return to the faculty full time while also leading the honors program.

“Teaching is my first love,” says Smith. “I just like interacting with students. I get to do a lot of that even in this job as chief academic officer because I make time for it, and I’m aggressive about it. But when you’re teaching and advising, it’s organic.” 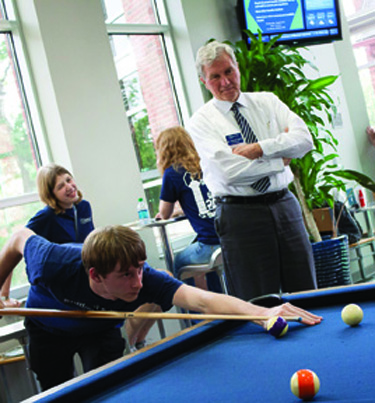 Though he has taught political science courses every other fall since 2000 at Columbia College, his spring 2016 course load will expand to include in-seat sections of American National Government and The Presidency.

His return to teaching may be another year away, but Smith has a lot on his plate between now and then.

“This coming fall I am technically on sabbatical, but the only thing I’m not going to be doing is teaching and advising because I’m going to be very busy preparing for a site visit from the Higher Learning Commission, preparing to teach my spring classes and working on the honors program.”

Until then he will continue as chief academic officer. Under President Dalrymple’s leadership, the college will transition Smith’s duties into a provost role, which Dr. David Starrett will fill starting in August.

“My goal for the remainder of my time in the office is to make sure Dr. Starrett inherits this fabulous faculty, a strong curriculum, continually improving processes and the kinds of support for teaching and learning that we’ve been able to build over the years.”

Smith feels confident that the provost will find just that. “This is a very special place,” Smith emphasizes. “The mission is wonderful. We deliver strong, quality academics. We have really raised academic standards and not just on the main campus, but everywhere.”

With a note of reflection upon his 19 years in office, Smith concludes, “It has been the privilege of my professional career to do this.”