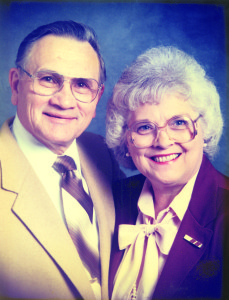 “Mr. Schiffman was passionate not only about higher education, but the roles of ethics, religion and moral development as part of an individual’s education. He will truly be missed,” Columbia College President Scott Dalrymple said in a letter addressing the college community following John A. Schiffman’s death on Aug. 5, 2015, in St. Louis, Missouri, where he resided. He was 99.

In 2000, Schiffman made a decision that changed the face of Columbia College forever. To honor his late wife, Althea, a 1941 Christian College alumna who had generously served her alma mater, Schiffman bestowed $1.5 million to the college to establish an endowed chair in ethics, religion and philosophy and a lecture series that would draw noted speakers to Columbia College. It was the largest contribution by a living donor in Columbia College history.

“It is my hope that through the endowed chair and lecture series, Columbia College will become a force in carrying forward the message to students that integrity, honesty, fairness and compassion are just as important as intellect,” John Schiffman said upon making his gift.

Althea Schiffman was named a Distinguished Alumna in 1985 and served on the Columbia College Board of Trustees from 1983 until her death in 1987, at which time John Schiffman assumed her position on the board. He remained on the board until 2007 and was named trustee emeritus and honorary alumnus for his many contributions and fervent devotion to humanities curriculum in higher education.

Dr. Anthony Alioto, professor of history, has carried the Schiffman’s charge. Having taught at the college since 1981, he had the honor of being named the inaugural Althea W. and John A. Schiffman Endowed Chair in Ethics, Religious Studies in 2002 and continues to serve in the role today.

“One of the first things he said to me was that he was really interested in enriching the lives of our students; he was a student-oriented guy,” Alioto said. “This [lecture series] was for the community and for the college, sure, but he wanted the students to meet people of international and national reputation dealing with ethics or subjects that have the ethical basis.”

Part of his work as endowed chair is to oversee the Schiffman Ethics in Society Lecture Series and Lecture in Religious Studies. Twice a year, the college draws renowned scholars to speak about how religion, politics, culture and education shape and influence major issues of our day. The well-attended lectures, which are open to the public, are among the highlights of the fall and spring semesters for faculty, students and community members alike.

Dr. Alioto himself has been a religious studies lecturer along with other speakers such as the Venerable Pannavati Bhikkhuni, who is a Buddhist Nun and Dr. D. Newell Williams, President and Professor of Modern and American Church History of Brite Divinity School at Texas Christian University.

“I would always call him and say, ‘Here’s who we have coming and here is the subject,’ and he would say ‘Oh, that’s interesting, is there something I can read about it?’ And I would give him books or a scholarly article or something that he would educate himself with,” Alioto noted. “He would come and he would be knowledgeable and he 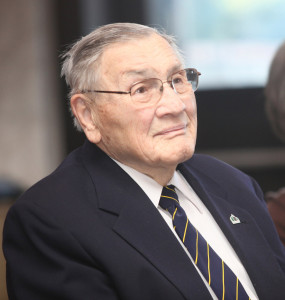 always would have read the book. I would kid him and say, ‘You are my best student, John, my other students are like, ‘Read, are you kidding me? It’s like pulling teeth without anesthesia.’”

“I will always read his quote and remember his hope that ‘Columbia College will become a force in carrying forward the message to students that integrity, honesty, fairness and compassion are just as important as intellect’ as I am looking for lecturers and subjects, especially subjects that we need to deal with that are ethically based,” Alioto said. “That’s what I keep in mind going forward along with enriching the lives of our students.”