Inspired by lifelong learning, she completed her degree at age 85 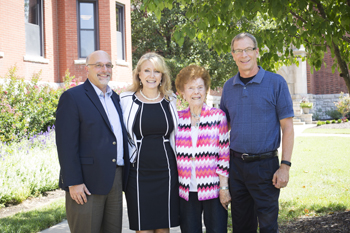 President Scott Dalrymple and his wife Tina, left, are joined by Catharina Bybee, and her son, Bob Layman. Bybee completed her bachelor’s degree at the San Luis Obispo campus in 2005 at the age of 85.

On Aug. 21, President Scott Dalrymple and his wife, Tina Dalrymple, had the honor of welcoming a special guest to the main campus.

Catharina Bybee, 95, is a graduate of Columbia College-San Luis Obispo. In 2005, she completed her bachelor’s degree in general studies with minors in psychology and sociology and finished in just two and a half years.

Bybee and her son, Bob Layman, a 2001 Columbia College alumnus, 2013 graduate of the Online MBA Program and resident of Springfield, Missouri, joined the Dalrymples for lunch and then took a tour of campus. Originally from Norway but a lifelong resident of California, Bybee was excited to see the main campus and to share some of her experiences as a student.

“I didn’t have a computer,” Bybee recalled of completing her assignments. “I used an electric typewriter.”

After spending years as a licensed vocational nurse in elder care, Bybee, a proponent of lifelong learning, decided it was time to go back to school.

“Everyone was so nice to me – the kids were wonderful,” she said of her time at the San Luis Obispo campus. “Someone was always there to help me. I still keep in touch with many of them.”

Students came to know Bybee as the lady who came to class toting two rolling suitcases packed with goodies.

“Some of the students would fall asleep in class, so I started bringing soft drinks, coffee, salads and chili beans,” Bybee said. “Students always wanted to know what classes I was taking next!”

Bybee enjoys volunteering for her church, gardening and traveling. Just two years ago, she traveled to Iceland to see where the Apollo astronauts trained for their landing on the moon. Bybee’s enthusiasm for lifelong learning is proof that you need not be young to go to college, just young at heart.