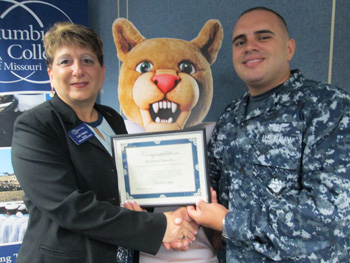 Columbia College-NAS Jacksonville has awarded a $750 Westling Scholarship to Harrison Zamudio in honor of Frank S. Westling. Westling was a decorated infantry soldier and former dean of the college’s Extended Studies Division, now the Division of Adult Higher Education.

Zamudio is pursuing a Bachelor of Arts in Business Administration, majoring in human resource management. He says the scholarship will assist with school expenses, allowing him to keep his educational progress on track. Zamudio enjoys his Columbia College classes and appreciates the challenges of the coursework.  One of his favorite classes has been business law because the topics covered were stimulating and applicable.

Zamudio’s goals are not only to complete his education but also to be accepted into Officer Candidate School. From there, he looks forward to a rewarding post-Navy career with many career opportunities. He believes that being a good sailor and a good student will go a long way toward securing his family’s future. He is not working alone; his wife has joined him in this education journey. They feel the example they are setting for their young daughter will surely lead her to a college degree and satisfying career, as well. He also hopes to be a model for the other sailors in his command.

Zamudio is a 10-year veteran of the U.S. Navy and has served under both land- and carrier-based commands, working primarily as an aviation structural mechanic. Zamudio has received three Navy and Marine Corps Achievement Medals, Sailor of the Quarter, Sailor of the Year, and recognition for outstanding performance of his duties during inspection.

Congratulations to Zamudio on his hard work and dedication to his family, education and career.