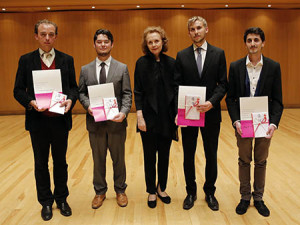 Back in February, CC Connected reported that NS Everett/Marysville music instructor Yiğit Kolat had been chosen as one of for finalists to compete in an international music competition in Tokyo, Japan. The prestigious Toru Takemitsu Composition Award 2015 competition took place at the Tokyo Opera City Hall May 31, and Kolat’s composition tied for first. The honor won him 750,000 yen, or about $6,050.

To get to the competition, Kolat’s composition difeʁãs had to stand out among 151 entries from more than 40 countries. The annual award, considered one of the world’s top honors for young composers, is given by the Tokyo Opera City Cultural Foundation and is just one of Kolat’s several accolades.