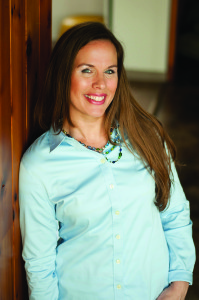 “If you had told me when I started at Columbia College that I was going to go on to my doctorate in clinical psychology, there’s no way I would have believed that was possible.”

At 37, Tracy Beegen ’06 is on course to finish her doctorate degree in clinical psychology. This 2006 alumna of the Fort Leonard Wood campus, volunteer, wife, mother of two and recently commissioned Army officer looks ahead to a military career that will allow her to serve those in need.

But hers was a journey that nearly didn’t start.

“I was a teen mom. I barely graduated high school. I didn’t think college was an option for me,” Beegen recalls, talking openly about her youth in Michigan.

Flash forward a few years and Beegen is married to Army Sergeant First Class Rockford Beegen. They have a daughter, Rylie, 2, and have just welcomed their second child, Giovanni. The family traveled for the Army and after three years in Germany, they were stationed at Fort Leonard Wood, Missouri. Soon afterward, Rockford deployed to Iraq.

“I knew I needed an education to provide a better life for my kids,” Beegen says about enrolling at Columbia College. “Plus, the campus helped me get acquainted with the military community and cope with my husband being gone.”

Beegen still feels the influence of her instructors at the campus.

“I remember taking my first writing class with Jackie Alexander,” Beegen says, pausing to remember Alexander, who died in a car accident in July 2005. “She helped me develop into a strong writer. Even as I’m writing my dissertation now, I’m still using the process she laid out for me.”

Beegen also remembers psychology instructor Dr. Rick Mizer, whom she credits for emphasizing her ability to pursue an advanced degree.

After a whirlwind of duty stations in Colorado and Hawaii — with Beegen completing her master’s degree in counseling at Wayland Baptist University in 2010 while in Hawaii — the family was stationed in their current home outside of Tampa, Florida, in 2011. Beegen continues her education — and a new direction.

After years spent as an Army wife, Beegen heeded the call to military service herself. She is now on track to finish her doctorate degree at the Florida School of Professional Psychology at Argosy University in 2017, with the help of an F. Edward Hébert Armed Forces Health Professions Scholarship that she received in February 2014. She will begin active duty with the Army in fall 2016.

From here, Beegen looks forward to a career in the military, serving families both on base and in the community wherever she is stationed. With her faith a key factor in her life, she and her husband will continue the mission work that recently took the family to Honduras. And she looks forward to coupling long-held passions for child advocacy and volunteerism with her education to continue helping those in need.

From a woman who thought college was not an option, Beegen offers words of advice to students.

“To have a dream and surround yourself with people who believe in you to accomplish it even when you don’t believe in yourself — that is something that I really valued about my experience at Columbia College,” she says. “Columbia College really impressed upon me to give back what has been given to me and encourage others to do the same.”

Beegen is doing just that.

* This article is featured in the summer 2015 edition of Affinity, the official magazine of the Columbia College Alumni Association. Check out additional content on alumni around the world via this link!