Welcome to the Columbia College family! 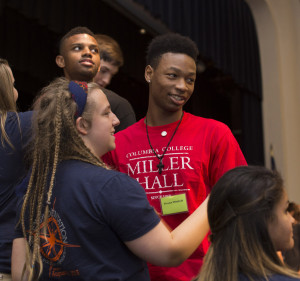 Columbia College held its annual new student “pinning” ceremony last week, a celebrated tradition on campus. At the beginning of the ceremony, the 177 new students sat with their parents. This was the second most students that have participated in the ceremony since it was initiated 19 years ago.

As their names were called, they stepped up onto the stage in Launer Auditorium, where they received a Columbia College pin. After leaving the stage, they sat in the center of the auditorium with their classmates, symbolizing the start of their college journey.

Check back to connected.ccis.edu on Thursday, August 27 for a complete recap of “Welcome Back Week” activities including photos, video and more!