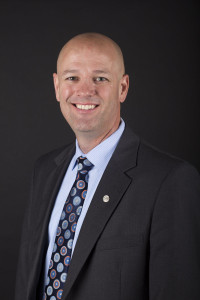 Dr. Jeffrey Musgrove, vice president for the Division of Adult Higher Education at Columbia College, recently announced the promotion of Mike Lederle ’10 to the position of campus director at Columbia College-Rolla. Lederle will assume the role at the Rolla campus on Sept. 21 with the departure of Kim Bonine, who will now serve as the director of the Lake of the Ozarks campus in Osage Beach, Missouri.

“Mike brings several years of experience in higher education administration to the position and has been a leader at every stop of his career including recently serving as the director of Military and Veteran Services,” Musgrove said. “We are fortunate to have him as part of the Columbia College team and look forward to his leadership at our Rolla campus.”

Lederle joined Columbia College in 2012, serving as assistant dean for Military & Federal Programs and was charged with assisting veteran and active military students navigate the college experience. Prior to coming to Columbia College, Lederle retired from the Columbia, Missouri Police Department as a Police Sergeant after 21 years on the force.

In April 2013, he also retired from the Missouri Army National Guard after 27 years, holding the rank of Command Sergeant Major of a Multifunctional Brigade while being deployed twice in support of Operation Enduring Freedom. During this deployment, Lederle earned the Bronze Star Medal and the Army Commendation Medal with Valor for his actions in combat.

He graduated with a bachelor’s degree in Criminal Justice Administration from Central Missouri State University in 1992 and then earned a master’s degree in criminal justice from Columbia College in 2010. Lederle resides in Hartsburg, Missouri with his wife, Kena and their two children.