Remembering those who have served 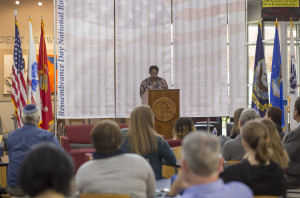 Graduate admissions counselor Lisa Conner-Collier reads the names of those who have died in the last year fighting the war on terror during the National Roll Call on Nov. 11, 2015.

Deeply rooted in the fabric that makes up Columbia College is an appreciation and respect for the U.S.
military. Whether it’s Military Appreciation Day, which is celebrated in the spring, or Veterans Week, which was recently observed by Columbia College campuses across the nation – 18 of which are located on military bases–the college’s admiration for those who serve or have served our country could not be more apparent.

“One of the great things for me is that I get to work every day with our military members and veterans as they try to attain their educational goal,” said Keith Glindemann, director of the Ousley Family Veterans Service Center. “I think it’s important that we take some time out to remember their service and to honor them for what they’ve done.”

The 2015 edition of Veterans Week certainly accomplished that, as it included several of the week’s time-honored activities, such as the morning flag raising ceremony, observing the National Moment of Silence, the decoration of Bass Commons with American flags and yellow ribbons, the illumination of the Columbia College military service tree and more. A new addition to the programming this year was the Greenlight a Veteran national campaign. 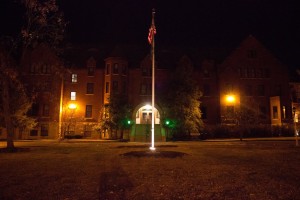 “We try to expand our Veterans Week activities each year,” Glindemann said. “This year, something we were excited to participate in was the Greenlight a Veteran project, which is a national movement to shine a green light and to encourage people to remember our veterans who are now assimilated back into the civilian community.”

In observance of the project, the college had green lights glowing in the lamp posts in front of St. Clair Hall and also in the bell tower on top of Federal Hall in downtown Columbia, which houses the Online Education program. One of the other very powerful events that
happens every year on Veterans Day is the National Roll Call. 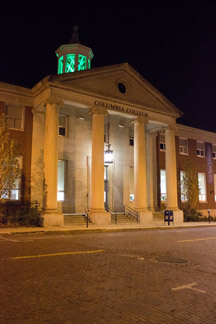 “The remembrance ceremony is part of the National Roll Call where colleges and universities across the nation have been reading the names of the fallen in the war on terror,” Glindemann said. “Starting in 2011 Columbia College participated in the first reading and read the names of the fallen to that point. Each year since, we have continued the tradition and read the names who had fallen since the last reading.”

Several students, faculty and staff take shifts reading the names of those who died. The college also posts a large banner with the names of every person who has been included in the roll call.

“As a military retiree, I can tell you that this ceremony is important in the fact that it helps remind us all of those who have made the ultimate sacrifice.”