A gateway to his future 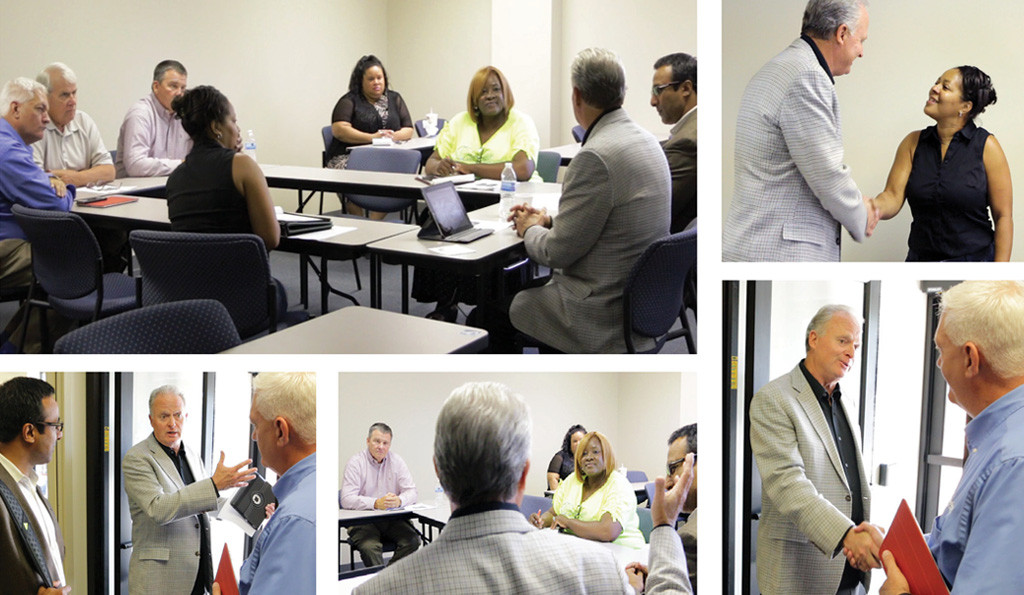 Roger Miller ’78 met with several students, faculty and staff from Columbia College- St. Louis as part of the campus’ Entrepreneurship Week earlier this fall. He provided insight, feedback and words of encouragement for aspiring business owners.

If you are a fan of entrepreneurship and you enjoy watching television, then you are definitely in luck these days. From Shark Tank, based on the premise of giving presenters a one-time shot to pitch their product to an investor, to Celebrity Apprentice, where celebrities try to raise money for a charity, prime time is rife with this genre of “reality TV.”

While those shows are entertaining and can provide some insight into starting your own business, future entrepreneurs should take note of the amazing journey of Columbia College alumnus Roger Miller. The founder and former chairman of Gateway Packaging Co. created and executed a successful plan to start his own business in 1982, utilizing past experiences, self-belief and a college degree.

Today, Gateway is one of the most successful packaging companies in the world, serving companies such
as Nestle’ Purina Pet Care. It manufactures flexible packaging and services the human food, pet food, industrial, chemical and medical industries from coast to coast and internationally. But Miller may not have had the chance to take the leap of faith and start his own business if it hadn’t been for Columbia College. He started his career at International Paper Co., stacking boxes at the corrugated materials plant. After several years and promotions, working his way up the ranks on the production planning side of the company, he decided he wanted to take a crack at joining the sales team.

“The more knowledge I gained about the business and the opportunities in the world, I decided I would like to have a career in sales,” Miller said. “I was told by the company management team that [I was] a great guy, had a lot to offer, but I didn’t have a college degree. If I was able to figure out a way to get that done, then they would consider me for a sales position.”

Enter Columbia College-Lambert Air Field  (now Columbia College-St. Louis) campus. It was 1974 and the college had just started a campus there. After vetting several colleges in the area, Miller chose Columbia College, mostly because of the flexibility of class scheduling.

“When you are working 60 hours a week in your career, going to class twice a week for four hours as part of the ‘mini-mester’ program worked really well,” Miller said. “There are a lot of challenges a working person experiences while working on their education. It’s a time element, it’s a job commitment when you are trying to blend all of those together to make it effective and make it worthwhile for both your company and for the education you are trying to get.”

After four years, Miller graduated in 1978 with a bachelor’s degree in business. And International Paper Co. and Weyerhaeuser Paper Co. were true to their word, adding Miller to their sales and management team. But after several years working for two great companies in different roles, Miller, as he says, wanted more.

“It’s a big step to leave a great job with a salary and a great career, but I was always the kind of guy that wanted more for myself,” Miller said. “Management changed, companies had different structures, and I just decided through the great training that I was receiving through International Paper, Weyerhaeuser and my Columbia College education that I had the skills and knowledge to build a business.”

And so he did just that, founding Gateway Packaging in 1982. As is the case with many fledging companies, raising capital was a challenge. In fact, Miller had to take $10,000 out of his retirement account from International Paper to start his company. That capital, along with the fact that his wife and company co-founder, Bekki Miller, continued her career as a teacher to provide insurance and cash flow, allowed the company to become a reality.

“An entrepreneur needs to know his or her business,” Miller said. “If you know your business from top to bottom, your odds of success are great.”

Miller put that knowledge to work, noting that due to the strong relationships he had established at his previous employers, his new company started out representing both International Paper and Weyerhaeuser Paper, selling rigid packaging such as corrugated boxes and folding cartons. Later, Miller recognized an opportunity in the label business and Gateway began producing pressure-sensitive labels and then began making flexible packing that was used for both pet food and human food. The company has continued to grow, boasting three manufacturing facilities in Granite City, Illinois; Kansas City, Missouri; and Wapakoneta, Ohio. While quality, innovative products, timely delivery and profits are crucial to the success of any company, Miller takes pride in knowing that Gateway’s most important resource is its employees.

Following the success of the company, Miller has received several awards including the Ernst and Young Entrepreneur of the Year in 2002 for Manufacturing in the St. Louis area. He is also a member of the St. Louis Children’s Hospital Foundation Board, a supporter of the United Way and several other philanthropic organizations throughout the St. Louis and Granite City areas. Miller also accepted an invitation to the Columbia College Steve and Barbara Fishman Center for Entrepreneurship Advisory Board and has been part of the group for two years.

“For me, being a nontraditional student, and being fortunate enough to live the American dream, it helped me to think through that and see that it might be important for other people who are trying to make it in life and create a great career that would have to go the nontraditional route,” Miller said. “I think Columbia College probably has the best national adult training program in the country.”

Watch the interview with Roger Miller and Raja Bhattacharrya, director Steven and Barbara Fishman Center for Entrepreneurship below!

This and many other great profiles on alumni, faculty and staff from around the country are featured in the latest edition of Affinity magazine. Click here to enjoy the complete issue!