When you walk into Columbia College history professor Dr. Brad Lookingbill’s office, you may think
you’ve walked into a small library, as it is filled with books on just about every subject related to American history and the military. The books reflect his devotion to what John Adams once said: “I must study politics and war, that our sons may have liberty to study mathematics and philosophy.”

His collection just increased by one, since he recently edited and published the book A Companion to Custer and the Little Bighorn Campaign. The book explores one of the most publicized and discussed battles in American history, the Battle of the Little Bighorn. It breaks down actions on the battlefield and combines information from a variety of historians, scholars and other battlefield experts.

“Historians like to take events from the past and put them in some kind of context. The Battle of the Little Bighorn is one of the most famous events in American history, but what hasn’t happened in most accounts is the connection of this particular battle to a bigger picture,” Lookingbill says of the book. “There was a need to review the historiography and literature on the subject and also to connect some of the enduring themes with American history in general.”

This is the fifth book that Lookingbill has completed. Wiley-Blackwell, his publisher, also has 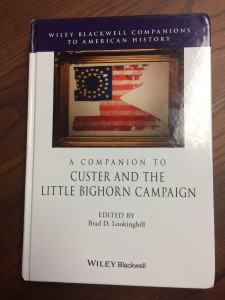 commissioned him to update their 2004 textbook titled Missouri: The Heart of the Nation for a fourth edition. Lookingbill believes that engaging in scholarship allows him to relate and to better connect with his students, because he is doing the same work that he is asking them to do.

“It’s probably not surprising that students look at professors as role models.  So when I’m engaged in scholarship, when I’m engaged in the practice of writing and thinking critically, I model the behaviors I want my students to demonstrate,” Lookingbill said. “As long as I can stay connected with students, I can continue imparting something to them about history that they can use.”

Click here to purchase or learn more about this book!