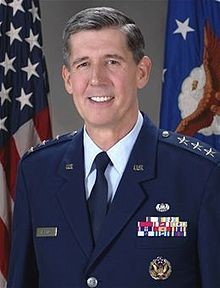 Columbia College Board of Trustees Chair Daisy Grossnickle ’66 recently announced the appointment of U.S. Air Force (retired) Lt. Gen. Richard C. Harding to the board. Harding’s first meeting as a board member will take place in January 2016.

“We are pleased to welcome Gen. Harding to the board,” Grossnickle said. “With 18 campuses on military bases around the country, the trustees have discussed the desire to have a member with a strong military background. Gen. Harding fits that bill perfectly. With his vast experience in the military and expertise in navigating different challenges throughout higher education, he is the perfect fit.”

In addition to joining the board of trustees, Harding has been selected as the featured speaker for the December 2015 commencement, set for Dec. 19 at noon in Southwell Complex.

Harding was awarded a direct commission in the U.S. Air Force as a first lieutenant in 1980. He rose through the ranks of the Air Force Judge Advocate General’s Corps (JAG) over the next few decades and served as the staff judge advocate to six separate commands, including service as the top lawyer and director of contracts at U.S. Strategic Command.

From 2007 to 2010, he served as the commander of the Air Force Legal Operations Agency, where he implemented changes that improved legal services in environmental, contract, labor, criminal and medical law throughout the Air Force.

In 2009, his Legal Information Services team won the W. Edwards Deming Award for an innovative workforce development and training initiative, only the second time an Air Force team has received this prestigious government award.

In 2010, he was promoted to lieutenant general, and President Obama appointed him with U.S. Senate confirmation as The Judge Advocate General (TJAG) of the Air Force.  Working with the U.S. Congress, Harding advocated for many new and revised federal laws, which were passed and signed into law by the president, some of which were the subject of a Department of Justice Special Services Award in 2014.

In addition to his other firsts, Harding created the premier Training and Readiness Office for the Air Force JAG Corps. The inspection process created under his leadership is credited with a worldwide improvement in Air Force legal services at its more than 80 locations.

Harding’s retirement from the U.S. Air Force was effective April 1, 2014. He serves on the Advisory Council of the National Crime Victims’ Legal Institute, as a board member for Welcome Home Inc., a transitional facility for homeless veterans, and as a member of the board of trustees for Columbia College.