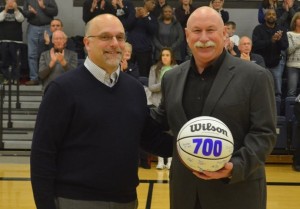 On Tuesday, Dec. 30, before Bob Burchard pursued his 703rd victory in 28 years leading the Columbia College basketball team, the school announced that this long-term relationship was secure enough to be put in writing. Shortly after Burchard received his umpteenth ceremonial basketball for surpassing the 700-win mark, the crowd at a noon matinee at the Southwell Complex learned that the Cougars will now play on Bob Burchard Court.

“Burchard puts his signature on another victory” – Columbia Daily Tribune

“It’s great to see when the good guys win.” – MissouriNet.com