Once again, the Columbia College main campus was proud to contribute to this community campaign by raising more than $17,600 in just under a month. Finishing out the year with the return of the Walking Taco Extravaganza in November, followed by a mini-event a Federal Hall and a month-long blitz of selling Jeans Day stickers and raffle tickets for awesome prizes, the Columbia College community rallied to blast its campaign goal for another consecutive year. 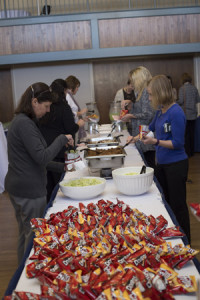 Faculty and staff enjoy walking tacos at the Nov. 3 Extravaganza.

Columbia College also benefited. Coinciding with the United Way campaign, employees had the opportunity to make a contribution to the We are CC Employee Giving campaign. In total, 38 employees participated, which raised nearly $8,900 for the college. Employees who committed to monthly contributions to the United Way and We are CC campaigns received nice incentives, including a half-day of vacation and five Jeans Day stickers.

“The support from faculty and staff for this year’s campaign for both the college and the United Way was overwhelming,” said Jennifer Truesdale, coordinator of Public Relations, who chaired the campaign. “The United Way estimates that one in five lives in poverty here in Boone County, so everyone who contributed may very well be supporting a friend or neighbor in need.” 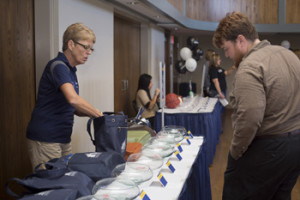 Those who attended the taco event enjoyed remarks from United Way Executive Director Andrew Grabau and CC’s own Dean of Student Affairs Faye Burchard, who serves on the United Way Board of Directors.

Participants could also peruse the raffle prizes, purchase tickets and Jeans Day stickers. Tickets and stickers remained on sale in the Office of Human Resources through Dec. 1.

A committee of devoted CC staffers, including faculty representative Dr. Teresa VanDover, associate professor of Education, oversaw the campus campaign. This year, the committee got a special boost from Suzanne Hickman, assistant director of Campus Support for the Division of Adult Higher Education. 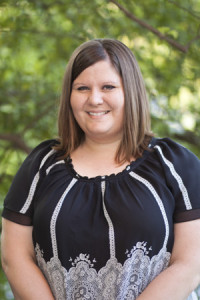 Hickman had the unique opportunity to participate in the United Way Loaned Executive program. Following four days of training last summer, Hickman left her post in AHE to be a full-time United Way staffer for five weeks from September to October to assist with campaigns across the city. She developed skills in fundraising, account managing, public speaking and assisting local agencies that were at different stages of their United Way campaigns.

“I love Columbia and was thrilled to gain a greater knowledge of our community, its needs and the network of programs and people that work to make the community better,” Hickman said of the experience.

Her attention to the CC campaign ensured the college had the hundreds of employee payroll deduction forms needed for Phyllis Grant, payroll manager, and Nathan Fleischmann, director of Annual Giving, to hand out personally office by office. She also provided the college with Jeans Day stickers and several fantastic raffle prizes. 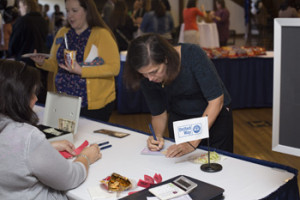 The raffle ticket and Jeans Day sticker tables were busy at the Nov. 3 event.

“The biggest pride point I experienced was with the new companies I worked with that decided to participate in the campaign,” Hickman said. “Once a company commits, it is more likely to continue its support in the future. This means, by helping to influence a new company to join the fight against poverty, my efforts could reverberate into the future.”

And Columbia College’s efforts will continue in 2016. Stay tuned for the next installment of the Walking Taco Extravaganza and your next chance to purchase Jeans Day stickers and win great prizes this fall to benefit the Heart of Missouri United Way.

Check out the United Way’s thank you to Columbia College on Twitter!