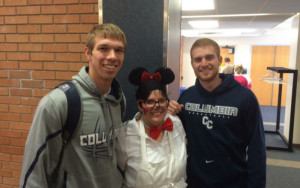 Columbia College basketball senior Zach Rockers has found much success on the court during his past five seasons. However, Rockers is enjoying what he is doing on a different court that is not the Southwell Complex.

“It brings so much joy to my day. I love to do this. I love to come out. These guys are my friends. That’s the best way I can put it,” Rockers said.

Every Tuesday, for the past two years, Rockers works with the Special Olympic basketball team in Columbia. The team name is the Cougars, just like the team he represents. He is an idol to each individual on the team. While the Helias graduate works with these players every week, he also has another weekly tradition with another Special Olympic athlete. Rockers and old Cougar basketball teammate Tanner Sutton make time to meet up with Columbia College cafeteria worker Sarah Byland once a week.