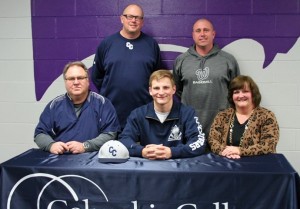 Columbia College head baseball coach, Darren Munns, officially announced the signing of Luke Miller to play baseball for the Cougars beginning next year. He is the son of Cindy Miller, who serves as director of the Columbia College-Kansas City campus.

Miller, a 6’0″ catcher, will join the Cougars after finishing up his senior year at Blue Springs High School in Blue Springs, Mo. Luke is a three-year varsity letter winner and was selected to the Missouri High School Baseball Coaches Association Missouri State Junior Sunbelt team in 2015. He is also a member of the Blue Springs Rod’s Athletics American Legion baseball team, where he led the squad to the 2013 Missouri State American Legion Championship. In addition, the team finished second in the District Championship in 2014 and won Districts in 2015.