Following high school, Valerie Wedel went on to college, completing a bachelor’s degree in French and peace studies at the prestigious Washington University in St. Louis, Missouri. Having had a penchant for arts and crafts since childhood, Wedel nurtured her artistic side through her 20s by developing her own jewelry business. She created millefiori polymer clay beads for her pieces, but began to find the process redundant. She had a yearning to express more through art.

“I had some ideas I wanted to pursue, so I knew I needed some training and wanted to go to art school,” says Wedel.

In 1998, nearly a decade after finishing college, Wedel discovered Columbia College and its art program. It would be just the first step on a journey that would transform her work from the smallest bead to full rooms awash with interactive video, performance and installation art. 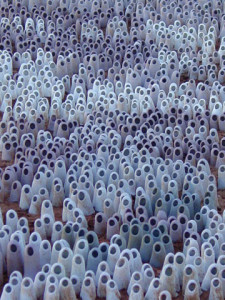 As Wedel embarked on her Bachelor of Fine Arts in painting and drawing, she felt a sense of connection with her classmates and professors. In particular, she developed a rapport with long-time art professor Ben Cameron, who retired in 2012 after 38 years of teaching. Cameron encouraged her to pursue a passion she would soon discover in Italy. 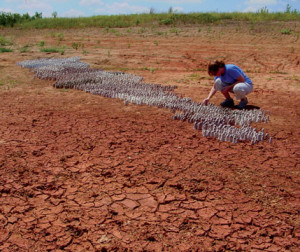 When the University of Missouri art department took a trip to see the Venice Biennial, an influential biannual international art exhibition, Wedel took the opportunity to go. Expecting to be wowed by contemporary paintings from famous artists, Wedel was instead drawn to expansive art installations that captured her imagination.

She was transfixed by Brazilian artist Ernesto Neto’s sprawling room of pendulous sacks of stocking-like material filled with aromatic spices that visitors were encouraged to touch. She was also inspired by British sculptor Antony Gormley’s “Field,” a room-filling flood of 210,000 human-like clay figures only inches tall whose eyes look upward.

“The idea of transforming the space into another world was really powerful for me,” says Wedel. “So when I came back from Italy, my ideas just kept turning toward installation [art].”

This inspiration she drew from Gormley could be seen in her 2005 installment, “The Search,” for which she created 6,000 hand-thrown ceramic figures and placed them winding over a parched, empty pond bed in Oklahoma. Over time, the raw clay succumbed to the weather.

“The figures were made out of unfired clay to symbolize impermanence and to emphasize the idea that as we come from the earth, we shall return to it.”

Following “The Search,” Wedel’s 2007 thesis work, “The Undoing of the Self,” demonstrated how far she had come in incorporating aspects of video and performance into her art. 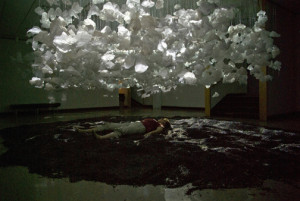 Spanning the entire 66-foot by 34-foot Bingham Gallery at the University of Missouri, Wedel created 3,000 “poufs” from melted translucent fabric, which she then hung in a cloud-like formation using monofilament thread. Using two projectors, she struck the poufs with the scrolling words, “This is an undoing, undue desire, I want to be undone, touch the undoing.”

The text on the poufs looked something like sunlight on water, and like rain or bubbles on the thousands of threads.

“Many people likened the sensation to being inside an electrical storm, yet with a sense of tranquility,” says Wedel.

To add to the multi-sensory experience, visitors were invited to lie down in 1,500 pounds of black sunflower seeds that stretched below the luminous cloud. As spectators became engrossed in the experience, Wedel performed in the installation, “harvesting” seeds or gently tossing them at their feet.

Flourishing in her art 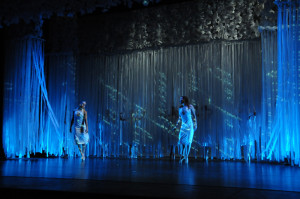 Since graduating from Columbia College in 2002, Wedel has had more than a dozen exhibits in Columbia, St. Louis and beyond, ranging from collaborative performance pieces to set designs. 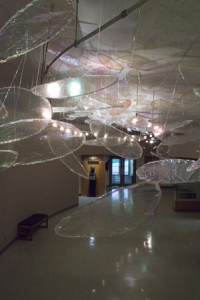 “On the Wing.” Photo courtesy of Columbia College.

In 2009, Wedel worked with the Missouri Contemporary Ballet to design a set that included her signature poufs and scrolling text for its production “Falling,” performed at Missouri Valley College and restaged in 2015 at the Missouri Theatre in downtown Columbia. In 2014, Wedel’s “On the Wing” in the Sydney Larson Gallery at Columbia College filled the space with dozens of shimmering insect wings.

Her current work, “Pairings,” a collaborative performance piece with artist Hannah Reeves, is on display through April 3 at the Albrecht-Kemper Museum of Art in St. Joseph, Missouri.

Wedel also actively exhibits at Missouri Valley College, William Woods University and Stephens College – schools where she regularly serves as an adjunct art instructor or is invited to lecture, something she’s loved since taking a teaching assistantship during graduate school. She has also taught at Columbia College and hopes to return to her alma mater to teach a course on installation art soon.