Women’s History Month is not as old as you might think. Beginning in 1981 as Women’s History Week, the time dedicated to the celebration of women’s achievements has since been expanded. Now, during the month of March, Columbia College highlights the accomplishments of women throughout history as well as drawing attention to the discussion of gender and the way people interact with the world.

Titled “Explore. Express. Expand.” this year’s series of events spanned the entire month and included discussions, films, lectures and art. Headed by Dr. Tonia Compton, associate professor of history, the college’s celebration was enjoyed by all who participated. Compton works with a dedicated committee of students, faculty and staff who meet throughout the year to plan and organize the events.

“We’ve been planning the CC women’s history month events since 2010,” Compton said. “I gathered some friends from the faculty and we decided to plan an entire month’s worth of events.”

And the events continue to grow.

But for Compton, it’s not just about remembering the great women of history, it’s about those we see every day.

“I prefer the stories of ordinary, everyday women whose names may never show up in a history book,” Compton said. “Women’s History Month is so important because it creates a time where we can focus on not only women’s contributions, but on current issues that impact women’s lives.”

The goal of each year’s theme is to encourage conversation and raise awareness, and the events surrounding the theme never fail to disappoint. This year’s celebration started off with a screening of the film Boys Don’t Cry (1999), a look into the real life story of Brandon Teena, who identifies as transgender but tries to hide it while living in a rural Nebraska town. Film is often a starting point for discussion, which leads into the keynote speaker, who follows a few days later.

Throughout the years, Compton has always been most excited for the key note lecturer. This year TED talk speaker iO Tillett Wright, an activist, artist, speaker and actor, presented in Launer Auditorium focusing on the idea of “normalcy” and expanding people’s understanding of the concept.

The keynote lecture is “a chance for our students to meet and learn from world renowned speakers from diverse backgrounds,” Compton said. “Every year I hear stories from our students about how much they have learned or been impacted by the speakers.”

And students’ new knowledge is often discussed at the Philosophy Club-hosted Gender and Identity discussion. Over a free Chipotle lunch, students take part in an open discussion of gender and association, exploring where ideas of gender come from and how these ideas shape the world around us. 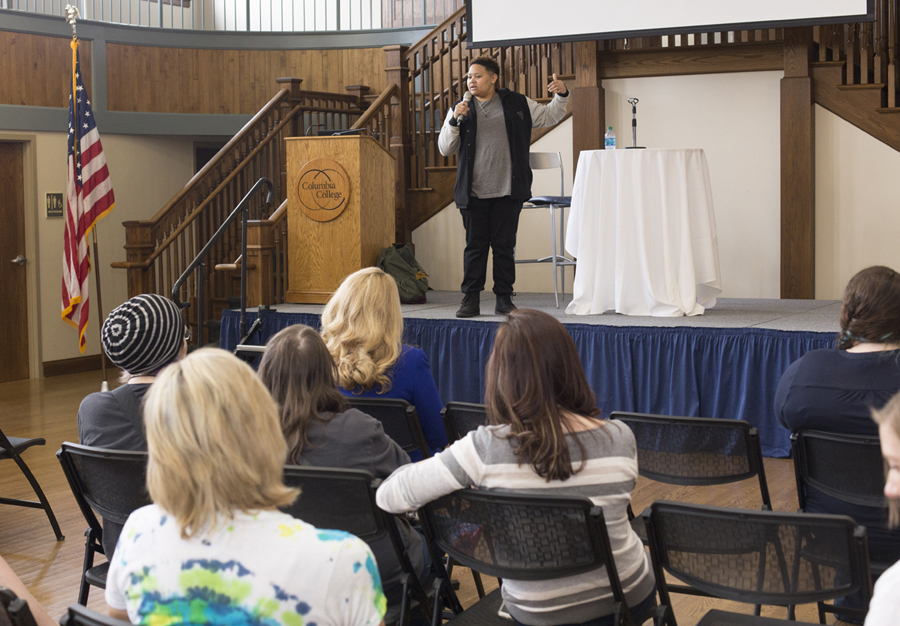 The finale for the month was the Creativity in Community Extravaganza in Dorsey Gym, featuring comedian HartBeat along with local artists.

The finale for the month was the Creativity in Community Extravaganza in Dorsey Gym, featuring comedian HartBeat along with local artists. Bringing together the campus community and the greater Columbia, Missouri, community, creativity and expression were explored together. Students and community members snapped photos, played games and enjoyed free food.

As the events drew to a close, Compton pointed out that history celebrates the most outstanding, extraordinary women who are remembered for rescuing paintings, fighting for the right to vote or speaking out for women’s education.

However, it is also the women “who assist armies in wars, raise children to be the next generation of leaders, protest injustices in their communities, volunteer their time to good causes and figured out ways to make a meal out of Ramen noodles,” that are part of women’s history, Compton said.

“These women are the backbone of women’s history because they have been there at every event in every time period, and their stories are our stories,” Compton said.

A month of celebrating outstanding women has finished, but it’s the quiet, everyday advances for women and feminism that will light the way toward next year’s events and the next generation’s history books.