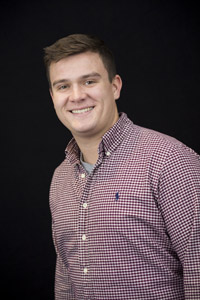 Senior Chase Barnes may have transferred colleges and moved to a new state surrounded by new people, but his passion for political science has never faltered.

Before he started college, at age 16, Barnes participated in a mock legislation at the Hugh O’Brien Youth Leadership Seminar at the Pennsylvania State Capitol building. This experience sparked a desire in Barnes to dedicate his time to having a thorough understanding of politics.

Learn more about the Barnes in the latest CC Focus!

CCC: Take us through what a Model U.N. simulation looks like.

CB: Prior to the simulation in February, each school is assigned a country to study extensively and represent. This year, Columbia College represented the kingdom of Jordan.

The simulation functions as the United Nations does. A majority of delegates spend most of their time in committees discussing predetermined topics like poverty, crime or the environment. Next, delegates write and vote on United Nations resolutions during a plenary session. There is also a Security Council, which spends a majority of its time working on resolutions, but also must address a crisis that takes place on a random day during the early hours of the morning.

CCC: You won the Outstanding Delegate and Delegate’s Choice awards at the MMUN simulation in St. Louis recently. What does it mean to you to be a good delegate?

I feel even more honored, however, to be voted delegate’s choice. The Delegate’s Choice Award means that the delegates I was working with chose me over themselves or other delegates as the best delegate in our committee.

I attribute both awards to just being kind. It is important to represent your country and your position at the simulation, but it is also very important to be personable. Don’t interrupt people when they are speaking, learn other delegates’ actual names not just their country and make small talk during breaks that isn’t about Model U.N. Doing these things helped me to advocate for Jordan, but it also helped me to make new friends.

CCC: In what ways have you grown through your experience in Model U.N.?

CB: Model U.N. has helped me realize that I have a particular skill set that allows me to negotiate and communicate with adverse opponents and to get a group of people to compromise with one another. Model U.N. showed me that I have the ability to lobby others to my advantage without compromising my own stances or integrity too much.

CCC: What other organizations/activities are you involved in? Why?

CB: In addition to Model U.N. I am the captain of the Mock Trial team. Mock Trial is a competitive trial advocacy group. Essentially, it is debate but in a courtroom setting. We travel all over the Midwest and compete in tournaments against other colleges and universities. We actually had a great season in 2015-2016, competing at six tournaments and getting second at our home tournament. We also had a number of team members win multiple individual attorney and witness awards, myself included.

I am also involved in Student Government Association because I care about Columbia College and I want to represent my fellow students.

CCC: What is one thing you want to do before you graduate?

CB: Before I graduate, I want to get on the patio on the roof of Launer Auditorium. I heard they used to hold cocktail socials there back in the day and I want to see it for myself.

CCC: What are your post-graduation plans?

CB: I have accepted a job at the Jacobs & Crumplar Law Firm in Wilmington, Deleware, as a paralegal assistant. I only plan on working there for about five months in order to save money. After I finish my employment at J&C, I am moving to Australia to work and travel.

CCC: Do you have a word of advice for any students looking to get involved in school activities?

CB: My first piece of advice is that ALL students should get involved. My second piece of advice is not to get over-involved. It is important to have a social life, stay on top of grades and remain healthy. If you spread yourself too thin, you might compromise those other important aspects. Finally, pick clubs you ENJOY doing and not just clubs that will help build your resumé. While using extracurricular activities to build your resumé is great, don’t join clubs if you only want them for your resumé. Join clubs to meet people and have fun.