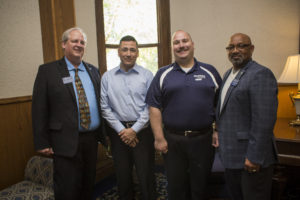 Alexander Greenberg and Albert Romero spent their morning draped in ivy. The two recent Columbia College graduates, both Nationwide students, were among the more than 100 students who took part in the Ivy Chain ceremony on Bass Commons on May 7, the morning of the college’s two May 2016 main campus commencement ceremonies.

Greenberg, from Columbia College-Orlando, blew a kiss to his wife as the procession made its way through Rogers Gate and around the commons. Romero, from Columbia College of Missouri-Lake County, was last in line when the ceremony began at Atkins-Holman Student Commons and first when the group recessed at the end.

Both were among the seven chosen — along with main campus students Ashley Brouder, Kaylee Brueggeman, Corri Hamilton, Katie Hodge and David Leon — to serve the integral function of ivy cutter, continuing a Columbia College tradition that dates back to 1900 by reminding all those in attendance that while the students participating may be entering a new phase in their lives, they will always maintain a special bond with the college and their classmates.

Greenberg and Romero were chosen from around 20 applicants to be the Adult Higher Education ivy cutter representatives, based on their academic profiles, involvement in their communities and an essay. Greenberg is a Deputy Sheriff for the Orange County Sheriff’s Office in Orlando, Florida, who has worked 18 years in law enforcement. He graduated with a bachelor’s degree in criminal justice administration. Romero is an active-duty Marine in his 16th year of service. He graduated with a Bachelor of General Studies and a minor in criminal justice administration.

Both Greenberg and Romero are the first in their families to graduate from college. Romero, his wife and eight children also made the trip down to Columbia when he earned his associate degree in 2014. He wants to set an example.

“I need to be a good role model for them to see that their dad’s finishing college,” Romero said. “I didn’t have the opportunities that they’re going to get, as far as going to college. I had to do it on my own as an adult. I guess just to be able to not give them an excuse, like, ‘Well, you didn’t finish college, Dad.’ Now it’s like, ‘Well, yeah I did.’”

By the time Romero is done with his education, he hopes to have his associate degree, a quartet of bachelor’s degrees and a Master of Social Work. He has long served as a volunteer mentoring disadvantaged adolescents in his community and hopes to become a Licensed Clinical Social Worker. He also hopes to teach at Columbia College someday.

“I just clicked with a lot of the teens. I started remembering my teenage years were kind of rough,” Romero said. “I was just kind of drawn to how effective I was with them, how I was able to control difficult situations by just talking to them. Never lecturing.”

Greenberg also hopes to return to Columbia College as an instructor. He plans on pursuing a master’s degree that will make him a more attractive candidate for promotions as he continues his career at the sheriff’s office.

He said he started at Columbia College because a bunch of his work friends were taking classes there. Soon, he was able to glean his own value from the experience.

While neither encountered the traditional route through college, both Greenberg and Romero got to celebrate their accomplishments in the manner Columbia College graduates have for more than a century: their own personal strand of ivy.

“You came in search of an education,” Columbia College President Dr. Scott Dalrymple said at the ceremony. “What I hope you found is much more than that.”