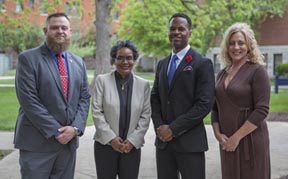 In 1999, Tonia Davis was diagnosed with multiple sclerosis. Two years later, while she was in the process of earning a bachelor’s degree in business from Columbia College-Salt Lake, doctors told her that she would never walk again.

Davis, who served in the U.S. Army, walked across the stage to receive her Columbia College diploma in 2003. She re-enacted that walk to cheers from the more than 100 people assembled for the Columbia College Alumni Association’s Alumni Awards Banquet and Presentation on the main campus on Friday, April 29. While accepting her Columbia College Service Award, Davis said the college’s staff was there for her even though she had to spend time away from school at the hospital treating her condition.

She used her degree to help start her own business, Tee’s & Lee’s T-Shirt and Sweatshirt Shop. At first all she had was a desk, pen and a paper and “a computer that my church gave me.” Now, it’s so much more.

“The staff at Columbia College in Salt Lake was at the hospital with my assignments in hand,” Davis said. “When you fall down, as my mother used to say, ‘put your Band-Aid on, get up and keep on moving.’”

Davis was one of four alumni award winners honored by the CCAA, along with Jared Reichel ’16, Heather Gieck ’15 and C. Byron Wilson ’07.

Reichel earned the Community Service Award for his efforts honoring veterans with the Home Runs for Heroes softball tournament he helped found, which benefits Central Missouri Honor Flight. Reichel, who graduated with a bachelor’s degree in communication studies earlier this year, served in Iraq and earned numerous military awards — including the Purple Heart — but said he was searching for direction in his life after an injury sustained from an explosive device ended his military career in 2008.

“God had a plan for me, and that was to be a 6-foot-2, 250-pound bullhorn for veterans, supporting them and making sure people never forget why we have the freedoms that we do,” Reichel said. “I challenge you to every day make a difference in someone’s life. Enhance their life, and you will enhance your own.”

Gieck and Wilson both said they couldn’t see themselves even going to college before Columbia College came into the picture. Gieck, recipient of the Jane Froman Courage Award, battled drug and alcohol addiction, even going to prison for three years, and enrolled at Columbia College-Jefferson City after completing a recovery program. She opened the Healing House and New Beginnings, a recovery program for women who suffer from substance abuse, the same year that she earned her degree and strives to help women who are traveling the same road she did change their lives.

Wilson, a Columbia native, didn’t see college as an option before his mother-in-law (then, his girlfriend’s mother), a Columbia College alum, told him during high school that he was too smart not to continue his education. He earned his bachelor’s degree in criminal justice administration in 2007, and now the Distinguished Alumni Award recipient manages multimillion dollar accounts as a contract specialist for the U.S. Air Force.

Growing up without much financial security made it so that the necessities of survival were more important to him than earning a college degree. Columbia College told him it would take care of all of that, Wilson said. His only job was to learn.

The CCAA also recognized its four CCAA Scholars Program recipients for the 2016-17 school year: Haley Skyles, Kayla Little, Michaela Horstman and Brian Smith. They each earned a $1,000 award and were chosen from an application pool of almost 300 applications based on grade-point average, credit hours and a 100-word essay.

“Tonight is a reminder of the great things we accomplish at this college,” Provost Dr. David Starrett said. “The spirit of achievement is reflected through its alumni and students. The prestige we enjoy as an institution is a direct result of your accomplishments.”

The awards dinner was part of the Christian College Reunion Weekend festivities on April 29 and 30, honoring the graduating classes of 1936, 1946, 1956 and 1966. The college welcomed back alumnae for events such as a walking tour around campus, an afternoon tea in the Archives and a trolley tour of Columbia hosted by Tiger Trolley Tours, which is co-owned by Jolene Marra Schulz ’61.

The weekend finished with an Ivy Chain and Remembrance Ceremony in Dorsey Gym, class photos and an alumni reception held at the home of Skip and Daisy Willis Grossnickle ’66.