Timothy Davis wasn’t going to let some quality time with Colonel Charles E. McGee pass him by, especially when the 96-year-old McGee had made the trip to Columbia all the way from Bethesda, Maryland.

Davis got to chat with McGee, a member of the Tuskegee Airmen and the National Aviation Hall of Fame, as well as the U.S. Air Force record holder at the time of his retirement in 1973 with 409 combat missions flown during World War II and the Korean and Vietnam wars, for about 20 minutes in Missouri Hall before Columbia College’s ninth annual Military Recognition Day ceremony May 26.

The two talked about how McGee got into the military in the first place, McGee’s decision to pursue his education at Columbia College-Kansas City and how McGee earned his degree in 1978 at the age of 58.

“He’s just a really nice, genuine guy,” Davis said. “He just talked about education being really important and to keep pursuing it and moving forward with it.”

Davis, a former petty officer in the Coast Guard is one of two recipients of this year’s $1,000 Col. Charles E. McGee Scholarship and was the only one on hand to be recognized for the achievement during Military Recognition Day. He has earned three degrees from Columbia College-Jefferson City and is now in the pre-Nursing program at the Evening Campus.

“It’s just invigorating to be able to give back and share in what’s taking place,” McGee said. “The young folks are our country’s future. We can’t overlook that.” 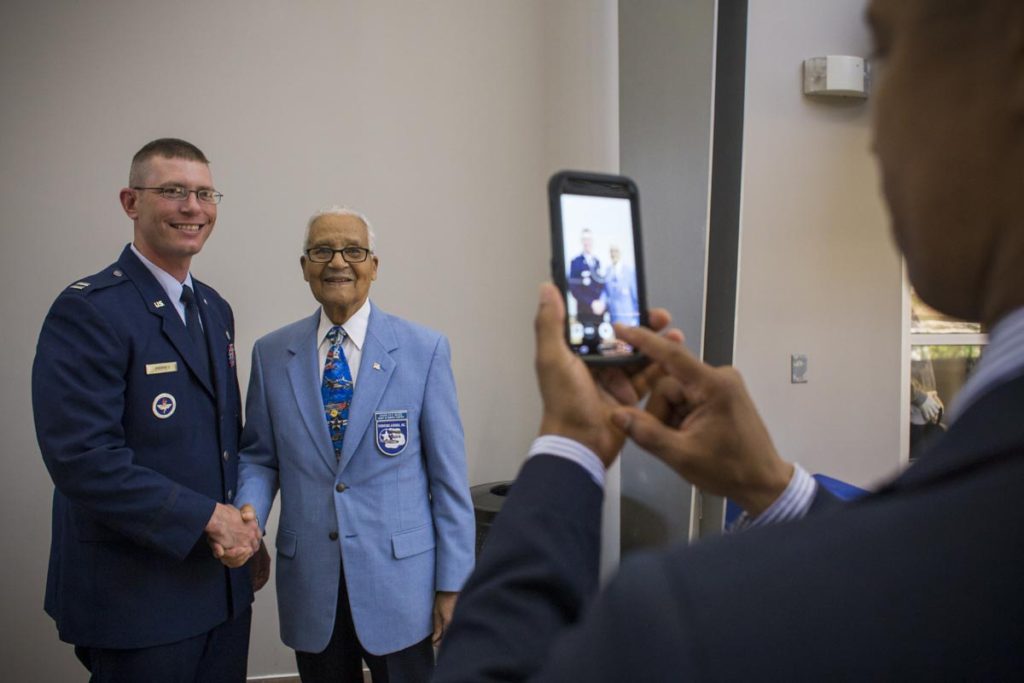 “Please recognize that our future promises exist because someone accepts the responsibility to serve today,” Dr. Brad Lookingbill, Columbia College history professor and a former member of the Army National Guard, said before the scholarship presentations. “And Columbia is here for you.”

During the 2015-16 academic year, Columbia College served 4,688 military servicemembers, 3,027 veterans and 1,564 family members, nearly 40 percent of the college’s total students for the first four sessions of the year.

Reynders, a four-year Marine Corps veteran, started his college career at the University of Missouri before joining the military. He chose Columbia College when it came time to pick up his schooling again and graduated with a Bachelor of General Studies from the Evening Campus in May, with plans to pursue Master of Business Administration from Columbia College.

“I just realized how veteran-friendly and how easy it was just to communicate with (the college),” Reynders said. “One of the big things veterans struggle with is finding a good college and a good veterans center they can really deal with and have interaction with. I think that’s kind of one of the biggest benefits I saw in coming back to Columbia College.”

The Military Recognition Day ceremony concluded with a color guard made up of four Columbia College students who raised the American and college flags on Bass Commons. The flags had been flown earlier this year at the Whidbey Island and Naval Station Everett/Marysville locations.

Columbia College also served a vital function in the city of Columbia’s Salute to Veterans Memorial Day Parade on May 30, with R. Marvin Owens Soccer Field serving as the parade route’s end point. The field also served as the landing zone for two parachute jump teams — the U.S. Army Golden Knights and the Canadian Armed Forces SkyHawks — that performed aerial maneuvers over downtown Columbia before touching down safely.

“Our values can slip away very easily if we’re not vigilant and don’t want everybody to be on board,” McGee said. “It’s not difficult to give back. You just have to be willing to do it.”