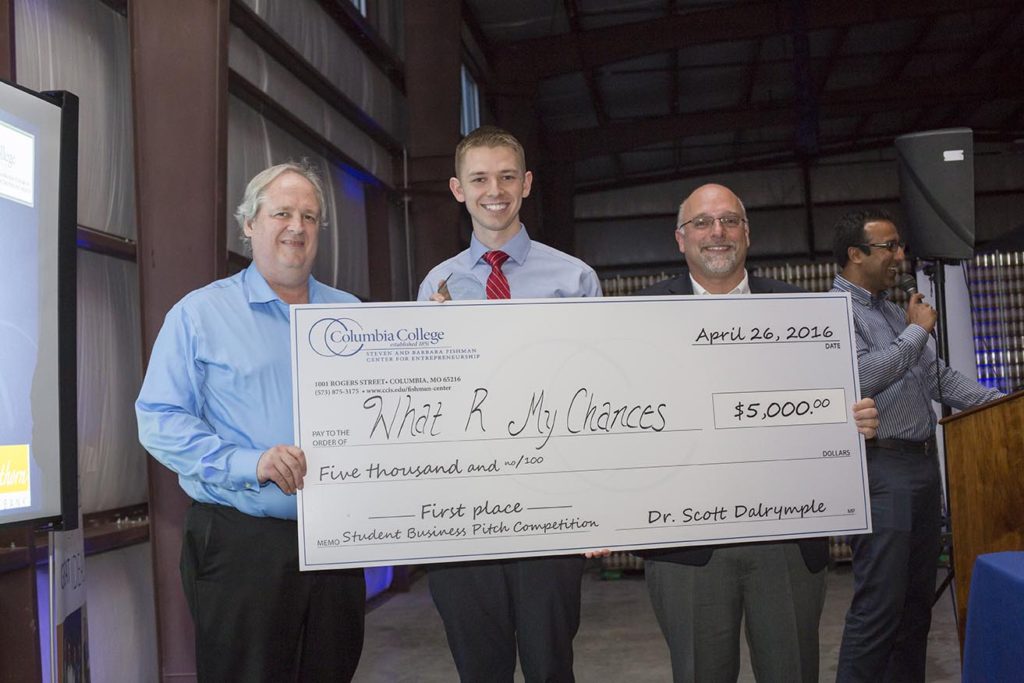 Trent Finley (center) was the winner of the student pitch competition. He is pictured here with Dr. David Starrett (left), provost and vice president for academic affairs and Dr. Scott Dalrymple (right), president of Columbia College at the awards ceremony.

Trent Finley ’16 wishes there was a service like the one he created when he was applying for admission to dental school last year. Maybe then he wouldn’t have applied to 10 different schools and spent $12,000 in the process.

Through that task, though, Finley hatched an idea: a website where aspiring dental-school students could plug in their academic information, utilize an algorithm Finley helped conceive and see how good of a chance they stood at getting into different schools.

That idea became WhatRMyChances.com, the presentation that won the $5,000 top prize at the Student Business Pitch Competition, presented by the Steven and Barbara Fishman Center for Entrepreneurship, during ’Trep Week on Monday, April 25. Finley, a biology major graduating this spring, was one of seven Columbia College students who presented to a crowd of around 70 people and four judges in the Brouder Science Center’s Bixby Lecture Hall. Brandyn Chambers ’16 won the $3,000 second prize — along with a $1,000 “audience choice” award — and Matthew Frappier ’17 won the $1,000 third prize.

Raja Bhattacharya, the Fishman Center’s director of entrepreneurship, said 10 pitches were chosen out of 37 submissions late last year, and three dropped out during the grueling, three-month journey from business plan inception to pitch competition.

“This is an event for the students. We are here for them,” Bhattacharya said. “The three months of pitch competition they go through and their preparation, that’s very significant. They learn a lot through this process. They pretty much learn how to build a real business.”

The exercise was especially enlightening for Finley who, as an aspiring dentist, had only a rudimentary knowledge of building a business model. He honed the idea for “What R My Chances?” with mentors Sara Cochran — a member of the Fishman Center board — and Corbin Umstattd ’11. He said the $5,000 prize will go toward installing and updating his site’s dental school information database, as well as going toward marketing and finishing the website.

Finley plans to start dental school at the University of Missouri-Kansas City in August.

The students’ pitches ranged from a mobile phone protection device based on a retractable cord and frame to a service for connecting Croatian athletes to colleges in the U.S., from a vegan food truck alternative to a rethinking of how the industry designs massage chairs.

Frappier sold the idea of his “Cross Cleats,” soccer shoes with adjustable inserts on the bottom so players can switch them out for different playing surfaces and conditions. Chambers promoted the online animation studio “Flydra Creative,” which he co-founded with his childhood friend Jabril Mack — a recent graduate of the University of Southern California — last year.

Chambers, a finance and business administration major graduating this spring, serves two roles as Flydra’s CFO: Chief Financial Officer and “Chief Fun Officer.” He says the $4,000 will go toward helping Flydra maintain its technology and possibly upgrading into the realms of virtual reality and motion capture.

“I was actually way more excited than nervous (about the pitch),” Chambers said. “The Fishman Center did a wonderful job preparing us for this, and I was getting to the point to where I would go through it so well that I would think I forgot something. But, in reality, I didn’t.”

The contestants refined their pitches through a series of biweekly meetings with mentors and two sitdowns with Columbia College President Dr. Scott Dalrymple, who announced the awards at the end of the competition.

With this sort of encouragement, Finley said, he might just give entrepreneurship a go.

“My whole plan is to continue to develop this, but I want to be a dentist,” Finley said. “I love dentistry. I worked hard for it, and that’s what I want to do. Obviously, if this thing makes millions of dollars … I don’t know how to answer that question.”